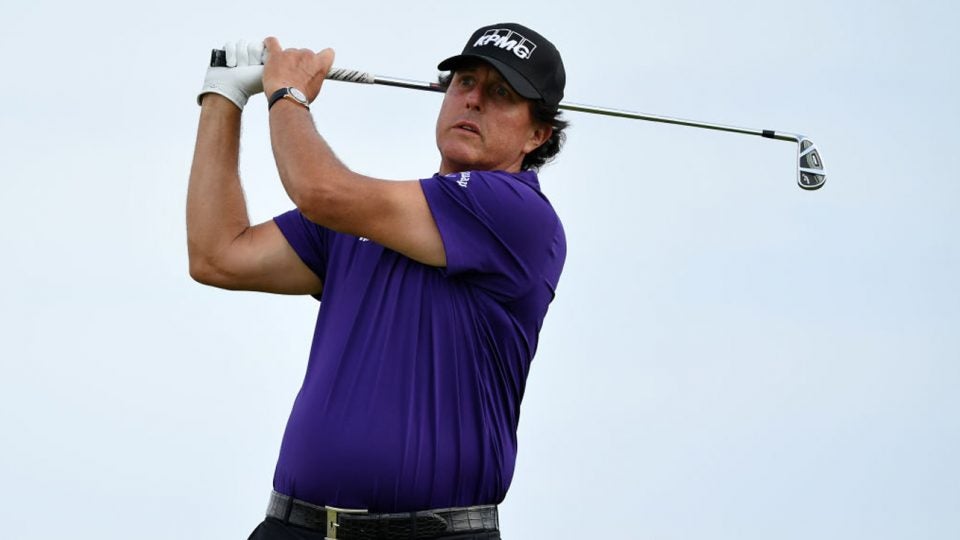 Lefty is going for his second Open Championship title this week.
Getty Images

In this installment of the #AskAlan mailbag, GOLF senior writer Alan Shipnuck fields questions about anything and everything: Phil Mickelson’s state of mind, whether or not Northern Ireland’s Rory McIlroy and Graeme McDowell have an advantage over the field at Royal Portrush for the Open Championship, and much more.

No question, just a declaration: The Open is the best major and it isn’t close.-@Lou_TireWorld

I feel like this is becoming a consensus view. The Masters is the Masters, but you can’t divorce the tournament from the weirdness of the host club, and what is often thought of as the foundation of the Masters’ appeal – the traditions of returning year after year – is actually becoming a little tedious. I mean, if I have to watch another shot on 16 trickle down the hill I’m going to doze off before the ball goes in the hole. But the Open is the perfect mix of old and new. These grand old playing fields date to the 19th century and every decade or so we get to celebrate them again. (Or, in the case of Portrush, every 70 years.) More than that, the golf is so refreshing. At times it can feel like an entirely different sport from the mindless bomb ’n gouge of everyday Tour events. And look at the drama we’ve enjoyed in recent years: Ernie overcoming Adam Scott in 2012; Phil’s epic finish at Muirfield; Rory’s breakthrough; Jordan chasing the Grand Slam at the Old Course; Phi and Henrik’s duel in the sun; Spieth’s wild finish at Birkdale; Tiger’s run and Frankie’s ruthless finish last year. What a heater.

Are Rory’s and G-Mac’s ties to the area an advantage or a disadvantage?-@TheTexasSteve

Both! McDowell is an emotional person and an emotional golfer. It’s easy to imagine him being carried along by the crowds to a dynamic performance. Whereas, McIlroy has a habit of getting in his own way when it really matters. Will he push too hard? Will G-Mac fall into that trap? Of course, if Rory gets off to a good start he could just keep going and deliver a performance for the ages. Here’s hoping.

Has Phil lost his damn mind?-@BCrawfordGolf

Yes, and it’s glorious! When Mickelson is playing well it’s a blast to watch. And when he’s struggling it’s even more interesting, because the search gets weird, as we’re seeing right now. But Phil is most dangerous when he’s been counted out, so it would be perfectly on brand for him to emerge from the abyss and make a run at this Open. Here’s hoping.

News
WATCH: Phil Mickelson reveals he lost 15 pounds in 10 days to ‘reset’ his body for The Open

What’s the capacity for number of superstars on Tour? How long before all the hot commodities (Wolff, Champ, Morikawa, Hovland etc.) blend with all the stalwarts (Rory, DJ, Brooks, Tiger, Phil etc.) and we lose track of them like Democratic candidates?-@linksplayers

It was indeed quite interesting two weeks ago in Minneapolis to feel like Bryson, at 25, was the O.G. when just last year he was the Next Big Thing. It seems like a decade ago we were all fired up about Cam Champ but that was earlier this season! Things are moving so fast these days. When was the last time you thought about Justin Thomas? Tommy Fleetwood? Patrick Reed? Jason Day?! These are all young mega-talents and right now it feels like they’re not even part of the conversation. It has to be a good thing that golf has so many keynote players, but your point is well taken: the hype-industrial complex is quite fickle.

If George Gankas’s teachings were a stock, are you selling, holding or buying?-@GoranBarnes

Buying! Matt Wolff is quite clearly the most intriguing prospect in golf right now but Gankas has dozens of other young talents in his stable, and Wolff’s success is only going to encourage more top players (young and old) to seek out this new-school guru. I went deep on this in a Golf Magazine feature, but what makes Gankas so appealing is his flexibility. Wolff’s success has led to the misconception that Gankas is a mad-scientist cooking up crazy swings, but the opposite is true: He’s an open-minded pragmatist working with what he’s given. “Every swing is different,” he told me. “Everybody is built differently. For me to try to put all people into one little box would be an ego thing. You can hold the club however you want. You can take it back however you want — down the line, laid-off, crossed-up, I’m down with all of it. The key is matching up tendencies. If you do ‘x,’ then you gotta do ‘y’ to get back to a Hall-of-Fame impact position.” It’s not hard to see why so many talented Millenials and Gen Z kids are flocking to him.

Where does Portrush rate compared to the regular rotation courses use for the Open like the Old Course, Carnoustie, Muirfield, etc.?-@SteveThomsonMN

We have to wait for this Open to play out before rendering a final verdict but I think it will emerge as the best test in the rota. It’s the biggest, brawniest of all the courses but also pretty tight in spots, meaning the long-game will be tested in a way that is increasingly rare as traditional links have become too short for the modern game. Portrush has the most interesting terrain of any course in the rota, which makes for more varied shot values and a much more interesting spectator experience than flattish courses like Carnoustie and St. Andrews. The circuitous routing means the wind is coming from ever-changing angles, unlike the repetitive out-and-back routing of a Royal Troon. Bottom-line: Portrush is an A+. 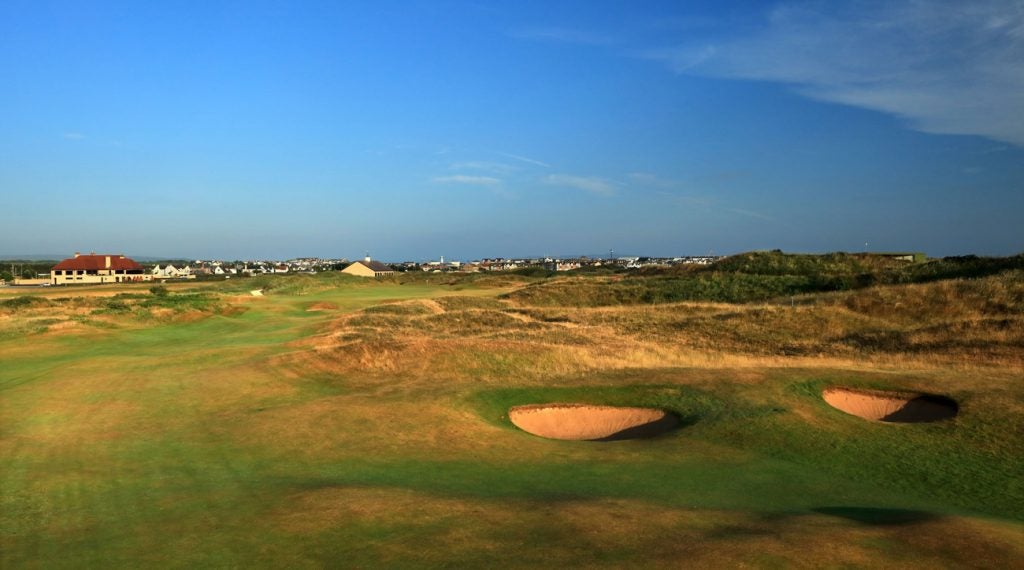 If asked, which player besides themselves do the participants at the Open want to see win this week? And would they say it on the record?-@Bsura22

Tiger would be the nearly unanimous choice, and no one is shy about expressing this. Many of these players got into golf because of him, and they retain an element of hero worship. The older players on Tour all know that Tiger is the reason they have a third house and second Ferrari, and nothing would be better for business than for his wondrous final act to continue. And then there is the ego part of it – it’s a little easier to lose to a GOAT than a Stewart Cink.

Ten years ago, the other TW came within a whisker of winning at age 59. Would that have been the greatest singular achievement in golf history?-@JoeGunter

I give the nod to Francis Oiumet’s storybook victory at the 1919 U.S. Open. For a kid from the caddie yard to beat the most celebrated professionals of the day and more or less launch an entire sport is a transcendent feat. Watson’s run at Turnberry was epic but not that out of the blue: it had only been a decade since he had won the Memorial, and in 2007-08 he won four Champions tour events, including the ’07 Senior Open at storied Muirfield. So he was still a force in the game, on a course he knew better than any other player in the field. Was his performance at Turnberry incredible? Definitely. But Ouimet’s win is the more singular achievement.

When will Royal County Down host an Open?-@WheresAlby

It’s certainly worthy but I don’t see it happening. The R&A is already committed to two more Opens at Portrush, and it is going to be such a homerun I can’t imagine it won’t become a permanent part of the rota. Does the Royal and Ancient want to cross the Irish Sea more often than that? Seems doubtful.

What are the most overrated and underrated aspects of playing links golf for the uninitiated North American duffer who has yet to make the trip?-@avsains

This time of year, given how far north we are, you can have dinner and then play a full 18 holes! What a joy. With all the poetic waxing on the subject, it’s hard to imagine any aspect of links golf is that underrated. But I can’t stress enough how fun it is to play different kinds of shots on the gloriously firm turf. At home, if I have 120 yards to the flag, into the wind, it’s probably a smashed 9-iron. Over here, my go-to shot is a punched, cut 6-iron that trickles forever. From 40 yards off the green I’m likely to choose a putter; back in the U.S. that’s not even an option, given the lush, soft turf. As for overrated, the only thing I can think of is there’s almost never any food available out on the golf course so you gotta pack your own. This qualifies as the ultimate First World problem.

No, he’s number two in the World Ranking.

He fluctuates between overrated and underrated. At 24, he’s won three times on the PGA Tour and four times on the Euro Tour, plus a World Challenge and a Ryder Cup beatdown of that tournament’s host. And in the last two years Rahm has three top-4s in the majors. Given all of that, it’s easy to make the case that he’s very underrated. But Rahm carries himself and talks about himself like a multiple major championship winner…minus the majors. So, he’s overrated, at least in that regard.

Yes, please. The Prez Cup desperately needs to spice things up. What better way to do it than invite golf’s It Boy, even if other players have more of a body of work. Who wouldn’t want to watch Wolff go crazy in fourballs?

Where do you come down on the post-round hat-iquette? Must the hat be doffed? Is this a new development? Is it rude not to doff?-@tdaveniii

It’s a pointless affectation. It’s not like you’ve just stepped into Buckingham Palace! As Kip Henley has often pointed out, the first things most dudes do after removing the cap is to run their right hand through their greasy, sweaty hair. Now you’re supposed to shake that stanky appendage? No thanks. Tiger seems to have popularized the fussy hat-off business around the turn of the century – I remember it figuring in a Nike ad of that vintage. But unless the spirit of Old Tom Morris visits me and instructs otherwise, I’m keeping the hat on.

Who wins next and why: Spieth or Morikawa?-@NickFMackay

Oof, tough one. Spieth is Spieth, capable of going on a run at any time, no matter how woebegone he appears at any given moment. But Morikawa has already established himself as one of the preeminent iron players in the game and exudes not only bulletproof confidence but also utter ease. He looks like he was born to do this. I’ll take the kid.

As a journalist what’s your ideal headline after the tournament is over?-@rstimsonbyu