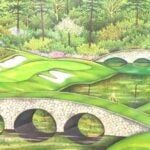 Valentino Dixon's rendering of the 12th green at Augusta National.

When it comes to holiday gifting for golf-lovers, you can’t go wrong with an iconic image from a bucket-list golf course. Turns out, that holds true for former presidents, too.

According to an Instagram post by artist Valentino Dixon, Dixon’s 20-inch-by-30-inch drawing of the 12th green at Augusta National, framed by the Hogan and Nelson bridges, was purchased by Michelle Obama as a gift for President Barack Obama.

While Dixon’s drawing is beautiful, it was his life story that was reportedly particularly affecting for Mrs. Obama. As first reported by Golf Digest, Dixon spent 27 years in prison for a crime he didn’t commit before Digest’s reporting helped contribute to the vacating of his conviction in 2018. Creating golf course art became a life-sustaining coping mechanism for Dixon while he was incarcerated. Dixon’s story was profiled on a recent episode of Real Sports with Bryant Gumbel on HBO, entitled “Fairway to Freedom,” which is when Mrs. Obama reportedly became aware of Dixon’s story.

But what made Dixon’s drawing of Amen Corner at Augusta extra-special is the fact that, according to Digest, it is his first completed work as a free man. You can learn more about Dixon’s story here.