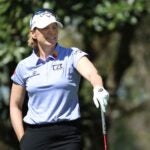 Annika Sorenstam fired a 75 in the first round of the 2021 Gainbridge LPGA.

It’s been 13 years since Annika Sorenstam — winner of 72 LPGA Tour events, 10 major championships and widely considered to be one of the greatest female players of all time — teed it up as an individual competitor in a regular LPGA Tour event. But on Thursday, at age 50, the legendary Swede carded a 75 (3 over) in the first round of the Gainbridge LPGA — good enough for T79 on the leaderboard at the time of her finish, nine shots behind the leader, Lydia Ko.

Sorenstam was, in her words, a “very late addition” to this week’s field and was motivated to compete by her desire to play in the upcoming U.S. Women’s Senior Open at Brooklawn Country Club in Fairfield, Conn., this August.

“I figured I just need some tournament rounds,” Sorenstam said on Wednesday. “I need some experience back inside the ropes and focusing on 18 holes, making putts, no mulligans and no gimmes.”

The fact that this week’s event is being played at Lake Nona Golf & Country Club in Orlando, Fla., where Sorenstam has had a home on the 16th hole for over two decades, made joining the field even more enticing.

“I was really persuaded more from my family and my parents, our kids, and then neighbors and then members, and the pro here,” Sorenstam said. “If it wasn’t for Lake Nona [being the host site], I wouldn’t be playing. This is not a comeback. It’s an appearance. And I’m just thrilled about that.”

With her husband, Mike, on the bag, Sorenstam held her own in an all-Swedish grouping comprised of Madelene Sangstrom and Anna Nordqvist. A triple-bogey on the par-4 5th marked Sorenstam’s only blemish on the front nine, while a bogey on the par-4 10th was neutralized by a birdie on the par-4 14th.

Though it looks like Sorenstam will have some work to do on Friday to get back in the mix, winning is far from her top priority this week.

“[To] find that switch and just kind of turn it on, it’s not as easy as I thought,” Sorenstam said prior to her first round. “I’ve been away for 13 years. A lot of things have happened. I don’t have the hunger that I did. I’m not stomping at the bit like I used to. I’m just excited to be out here and be playing and swinging the club.”

On behalf of golf fans everywhere, so are we.