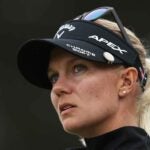 Madelene Sagström looks on at a tournament.

In the summer of 2017, Madelene Sagström was on the cusp of a breakthrough. The reigning Symetra Tour player of the year, Sagström had set the developmental tour’s single-season earnings record just six months earlier. In just a few months, she would compete for Europe in the Solheim Cup as one of Annika Sorenstam’s captain’s picks.

But Sagström’s breakthrough did not come on a golf course. Rather, it was in a Facebook post.

“I’m proud to be a part of the Swedish campaign ‘Inte ensam, aldrig glömd‘ (not alone, never forgotten),” she wrote on July 22. “Today three kids in every class get sexually assaulted. Most never tell anyone and have to live through this horrific experience all on their own. I was one of those kids. It took me 16 years to tell anyone and now I consider this one of my biggest strengths. This is my story.”

In 753 words, she said it all. The story of her sexual assault as a child. How she carried it with her alone for 16 years, determined to keep it a secret forever. How, in 2016, she finally revealed her secret to her mentor, 11-time European Tour winner Robert Karlsson. How that was the day “her walls came down.” How it was the best decision she ever made.

“All I wanted to hear growing up was that I was okay,” she concluded. “This is me, my story and I’m okay just the way I am!”

Today, Sagström is the face of the LPGA’s latest “Drive On” campaign, an initiative started by the organization to “celebrate strength, focus and perseverance.” In a five-minute spot released by the LPGA Monday, Sagström shares her story again in the hopes of providing a light for others like her.

“I think the video is such a good capture of darkness leading into light because that’s kind of how I felt about the whole journey in general,” she told a small group of media members in a press conference Sunday. “It’s at a point where I’m really proud of it, but at the same time I’m sitting here shaking because it’s emotional because it’s a big part of me and what I have gone through.”

The journey began for Sagström in 2016. Then 24 years old, she’d reached a personal crossroads. She’d been a prolific collegiate golfer — winning SEC player of the year honors at LSU — but as she worked with Karlsson to build out her professional career, she found herself at a mental hurdle.

“I remember sitting in a hotel room and crying,” she said. “I was so focused on preparing for the upcoming season, but I felt like I couldn’t keep this secret inside me anymore. I needed to tell someone.”

When she worked up the courage to tell Karlsson, struck by the weight of the moment, she almost immediately burst into tears.

“I could see it was a relief for her to talk about it,” he said. “It was a strong emotional thing for me because she trusted me.”

Not long after their conversation, Sagström began to blossom.

“It literally happened overnight in a sense,” she said. “One day we were on the golf course, I was hiding behind Robert in the pro shop, not saying anything. I told him what had happened, and the next day I was like, ‘I’m here, come see me.'”

Now 28 years old, Sagström has spent the better part of the last three years focused on continuing her growth. She has remained a vocal advocate on social media, and has grown comfortable speaking earnestly about her experience as a victim of sexual assault in the hopes of helping others gain the confidence to do the same.

On the course, her game has followed suit. In January of last year, she won her first LPGA tournament, the Gainbridge (also this week’s LPGA event), and reached the top 50 in the Women’s Rolex world rankings for the first time in her professional career.

“The whole reason why I wanted to start working with Robert was because I wanted to be the best golfer I can be,” she said. “I learned that the person Madelene was more important than the golfer, that if I work on myself, the golfer will follow.”

It’s been nearly five years since Sagström told the world about her assault, but she admits it still isn’t natural for her — or anyone — to share a story of such personal magnitude. The courage to continue telling it comes from the knowledge that she isn’t alone.

“You’re showing yourself kind of naked in a way, but I’m really happy that we’re doing this because I know there’s a lot of people out there that feel alone, and not just in any kind of trauma, in any kind of hard experience,” she said. “It’s easy to feel like you’re the only person in the world.

“I just want to be there for somebody else knowing that I have a platform. I can share my story and maybe reach out to somebody.”