Amen Corner in the autumn at dusk? Yep, it’s every bit as magical as it sounds 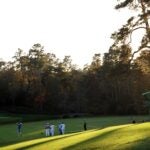 The par-3 12th hole at Augusta National late on Friday.

AUGUSTA, Ga. — Dusk came early to this sunken corner of the course on Friday evening. Up on the high ground — on the 9th green, on the 10th tee — you’re a little closer to the sun, there are no trees and it stays light later. But not here, down in the holler, where the 13th fairway ends and falls into a slender creek, the green a yard or two above it.

Bryson DeChambeau hit his second shot from 130 yards into that green. Soon after, the work-whistle blew, the sound literally bouncing off the pines, back whence it came. It was 5:32, Timex Expedition time. The beefy Texan and his playing partners — Jon Rahm of Spain and Louis Oosthuizen of South Africa — marked their balls on a green so lovely no poet could capture it. So lovely to look at, anyway.

DeChambeau will sleep on maybe 20 feet for an eagle. The gloaming was still and warm. He’ll rise on Saturday before the sun, return to 13, and try to make his putt, and try to make this cut. The players know the drill. Balls in the air at half past seven. Or, for the three gents on 13, on the ground.

Elsewhere, on this summery mid-November afternoon, the baseball commissioner, Rob Manfred, a member of the host club (Augusta National), watched the golf with binoculars around his neck and a pairing sheet in his pocket. It’s an invitational, this Masters Tournament, and it always has been.

If this 84th edition of the tournament has one identifiable forebear, it’s likely the first one, played in 1934, in late March, when Horton Smith and Jimmy Hines and Emmet French were your first-round leaders. You could imagine the members and their wives wandering around that year, too, no gallery ropes, binoculars in hand. Nothing says I’m-into-this more than binoculars. Those cardboard telescopes used to be an equal tell, but the club hasn’t allowed them in years.

This year, on Thursday and again on Friday, he used a driver, teed up no more than half an inch off the turf. It’s the damnedest thing. He hits a hard fade off this low tee and twice now has found the fairway and made par. He was on 11 when his day ended. He was coming into Amen Corner just as the DeChambeau-King Louis-Jon Rahm trio was leaving it.

DeChambeau plopped himself down behind the wheel of a waiting cart and his caddie sat down beside him, holding their giant tour bag, their tool kit, with his knees. Louis turned on the cart’s lights and waited for his wife to come down a hill and join him. Bryson, the way his cart was situated, was stuck in place until Louis hit the gas. They headed up the hill, back to the clubhouse, its second-floor lights burning for all to see, on the chance they needed a beacon, on the chance they didn’t know the way home. But they did.