21-year-old amateur is amazingly in contention at the U.S. Women’s Open 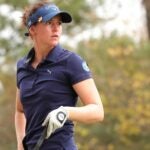 Linn Grant is just three off the lead at the U.S. Women's Open through two rounds.

HOUSTON — Linn Grant has been in this position before. This time though, she hopes the ending will be different.

Grant was T4 through 36 holes during her inaugural U.S. Women’s Open appearance two years ago at Shoal Creek in Alabama, but she shot 78-81 on the weekend to finish T57. But that rough ending — “probably the worst thing that could happen,” she said — could turn out to be the best thing that could happen if she can draw on that experience this weekend in Houston.

“I’ve experienced that now, being in that position that I was,” Linn said Friday after her second of back-to-back 69s. She’s one of just five players to break par in both rounds thus far. “I feel like I can do better this time for sure.”

That maturation has shown in her results since that disastrous weekend two years ago. The Arizona State redshirt sophomore won her first collegiate tournament in March at the Dr Donnis Thompson Invitational on her way to second-team Golfweek All-American honors, and she finished in the top 10 in five of her seven events, carding a team-high 12 rounds under par.

Her success on the amateur circuit has translated well into pro events. Grant won twice on the Nordic Golf Tour this past summer, earning her spot atop the Order of Merit for the pro tour.

While much is different about the young Swede since the last time she found herself in this position, some things are the same — such as her caddie (and father), James Grant. An accomplished amateur player himself, James was on the bag for his daughter at her first U.S. Women’s Open, in 2018. However, they did have one particular snafu that still makes them cringe.

On the opening hole of the third round during the 2018 Open, James provided an incorrect yardage for his daughter, and she flew the green by some 20 yards. Her round — and tournament — unraveled from there.

“I had a really hard time to really trust him again,” Grant said. “I didn’t really recover from that. I don’t think he did, either. We’ll try to not put ourselves in that position again.”

Luckily, mending a caddie-player relationship is much easier when there is a daughter-father foundation beneath it. The two have since recovered from that incident and are rolling this week in Houston.

Grant’s precision with her irons has been particularly impressive as she’s hit 28 of 36 greens in regulation. That pinpoint accuracy has led to eight birdies against just four dropped shots for the week.

“She fairly good at everything. She has no bad parts of her game,” James said. “I think her best game is around the greens, which you haven’t seen because she hits the greens so much.”

Even with her stellar play thus far, the climb is still steep for Grant if she hopes to etch her name on the Harton S. Semple trophy. She finds herself three shots behind 36-hole leader — and 2019 AIG Women’s Open champion — Hinako Shibuno heading into the weekend. And that’s before considering that just one amateur (Catherine Lacoste in 1967) has ever won this championship before.

And though the deck is seemingly stacked against her, it hasn’t done much to diminish her confidence.

“I do, absolutely,” Grant said when asked if she believed she could win this weekend. “If I play like do now, I think I have a chance.”