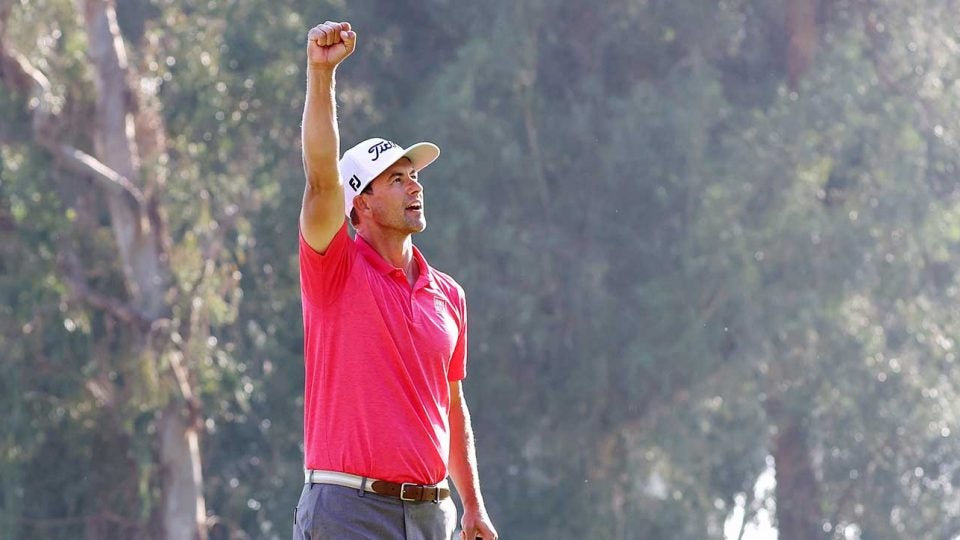 He meant no harm, truly, but it was definitely symbolic – Scott was focused to finish at the top of the Genesis Invitational, and really all those would-be contenders around him could do is wave the trophy goodbye.

Scott, who entered the day tied for the lead with Rory McIlroy and Matt Kuchar, shot a one-under 70 to win by two shots over Sung Kang, Scott Brown and Kuchar, good for Scott’s first victory since 2016 and 14th overall.

“It’s amazing,” Scott said on the CBS broadcast. “I’ve loved this place since Day 1. It was tough out there today. I’m excited for this.”

Here’s everything you missed from Sunday’s action at Riviera Country Club.

Scott’s bomb on the 15th may have actually rattled him a bit, as he bogeyed the hole to make a two-stroke lead just one. He rebounded with a solid par on the par-3 16th, then rebuilt his two-stroke lead with a birdie on the par-5 17th. He went drive, iron approach, putt, putt on the 18th to finish off the victory.

It was not the only time during the round that Scott showed his resolve. On the par-4 5th, he double-bogeyed and McIlroy triple-bogeyed – but Scott fans were spared the slaughter, as the sequence occurred during the transition from the Golf Channel to CBS.

News
Rory McIlroy and Adam Scott blew up when the broadcast went off air. Here’s what happened

Brown tied for the day’s low round with a 68, while Kang checked in with a 69. Brown birdied the 18th to give himself a shot, while Kang had a colorful scorecard on the front nine – an eagle on the 1st and birdies on the 6th and 9th — but a double bogey on the 2nd and bogeys on the 4th and 5th.

Kuchar had held at least a share of the lead through the tournament’s first three days, but bogeys at 10 and 12 did him in.

Matsuyama and DeChambeau each made their runs with 69s.

Tournament host Tiger Woods started the day 15 shots behind the leaders and was relegated all the way to starting on the back nine – and it really got only worse, as he finished last among the players who made the cut.

Any hopes of the Woods-iest miracle of all were dashed quickly, as he bogeyed 11, 13, 16 and 18. His second nine fared worse, as he double-bogeyed the par-three 6th and bogeyed the 7th and 8th on his way to shooting a six-over 77 to finish 22 strokes behind Scott.

Of course this is Tiger, and there were some dramatics. On the par-5 17th, his third shot didn’t escape the bunker, only for his fourth shot to trickle in for a birdie. Which brought a wry smile to Woods’ face.

These two shots from @TigerWoods?

Golf in a nutshell. He can't help but smile.#QuickHits pic.twitter.com/mDpFIzYhmB

And what happened to Rory?

McIlroy showed his frustration on the 10th, punching the pin as he walked off the green. He simply could not overcome the triple on the 5th – which he followed with a bogey on the 6th.

On the par-4 5th, McIlroy missed both the fairway and his approach. His first chip went up a hill and back down before he got on, where he then three-putted. The world’s top-ranked player did birdie the 18th to give him the tie for 5th.