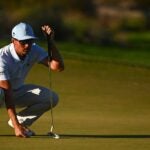 The 2021 CJ Cup continues on Sunday, October 17, with the final round at The Summit Club in Las Vegas. Here’s what you need to know to watch Round 4 on TV or online.

After firing two of the best rounds of the day, respectively, Rickie Fowler (63) and Rory McIlroy (62) put themselves in position to add some drama to the back nine on Sunday afternoon in Sin City.

For Fowler, who notched only one top 10 last season, a win would mark his first win since the 2019 Waste Management Phoenix Open, ending a lengthy victory drought. Fowler is trying to climb out of a slump that saw him miss the FedEx Cup playoffs last season. He was also left off the winning Ryder Cup team.

McIlroy, a former World No. 1, is currently ranked 14th, and his last win dates to May of this year, when he claimed the title at the Wells Fargo Championship. The two fan favorites will tee it up alongside rising star Abraham Ancer in the final grouping at 2:50 p.m. ET.

But playing just ahead of them will be another dangerous trio: Robert Streb, Adam Scott and Tyrrell Hatton tee off in the penultimate grouping at 2:38 p.m. ET. All three players are within four shots of Fowler’s lead, and have proven they can go low this week.

Below you will find everything you need to watch the final round of the 2021 CJ Cup on Sunday.

How to watch CJ Cup Round 4 on TV

Golf Channel will air the final round of the 2021 CJ Cup with three hours of coverage on Sunday from 5-8 p.m. ET.

How to stream CJ Cup Round 4 online

You can stream the final round Golf Channel TV coverage of the CJ Cup on golfchannel.com.

Check out our new GOLF products!