9 reasons why this PGA Tour restart will be fascinating 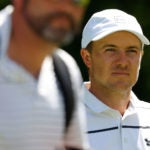 Jordan Spieth will begin his 2020 season again as the No. 56-ranked golfer in the world.

Three months ago, American sports stopped. The NBA shut down. MLB postponed its season. The PGA Tour was mid-tournament at the Players and it all came to screeching halt. But this week the Tour returns. Golf is back! Down in Fort Worth, then South Carolina, Connecticut, Detroit, Ohio …

On this week’s episode of the Drop Zone podcast, we’re catching everyone back up to speed with where we left off. The 10 storylines you forgot about, things you must remember, ways this tour season will be unlike any other, all of it in the episode below. You can subscribe to the Drop Zone here: iTunes | Spotify | Stitcher | PodBean

1. Rory McIlroy and Justin Thomas are your POY front-runners

Remember when McIlroy started hot last year, winning the players and polishing it off with a win at the Tour championship? Well, he’s been even better this year, finishing in the top 5 in every event of 2020. But then McIlroy didn’t swing a club for seven weeks.

Let’s say Rory comes out and doesn’t play well during the first three weeks. All of a sudden he’s got 10 weeks left to do something. Is he going to play in Europe? Would that trip be worth it? Thomas will play a bunch here in the United States. He’s fully healthy, unlike a year ago. He’s probably the true favorite here.

2. One major this season! Only one!

The PGA Championship at TPC Harding Park is two months away. That’s the only major championship in this PGA Tour season. Whoever wins is going to have a great case for Player of the Year.

Beyond that, it becomes increasingly likely that the eventual player of the year is a player who didn’t win a major for a second consecutive year. Is the PGA Championship all Brendon Todd needs to lock up the most surprising POY finish in Tour history? This is a somewhat trivial point, but someone could play elite golf at Muirfield Village, win twice and finish in the top 10 at TPC Harding Park and put together a nice campaign.

3. The Ballad of Sungjae was just beginning

Sungjae Im is your FedEx Cup points leader, largely because of his win at the Honda Classic and subsequent third-place finish at the Arnold Palmer Invitational. The man doesn’t have a home base, and just plays and plays and plays and plays. What does a three-month absence of events do to his game? We’ll have to wait and see how he plays this week.

4. Patrick Reed was winning his way through the haters

It is not long ago that Patrick Reed found himself in the middle of controversy at the Hero World Challenge. It was only seven months ago when Reed was penalized for moving sand behind his ball in a waste area. Since then, Reed showed up in Hawaii and nearly won the first event of the season. Then he went out and won the WGC-Mexico Championship against a stacked field.

Many people argued that Reed’s actions in the Bahamas would follow him around forever, but it was easy to lose track after his victory and a three-month break.

5. Phil Mickelson is running out of (qualifying) time

The U.S. Open is just three months away and Mickelson is currently on the outside looking in. The soon-to-be 50-year-old is currently not qualified to play in the event, and if he hasn’t changed his mind he intends to make it on merit alone. That means no special exemption from the USGA. What did we last see him do in Tour competition? Miss back-to-back cuts before the coronavirus shutdown. His best bet is to come out and play his way into the top 60 in the world ranking.

6. Tiger was playing poorly, and it was starting to get concerning

Do not let one round at Medalist with Tom Brady make you forget what Tiger Woods was doing prior to the coronavirus shut down. He was struggling. Woods wasn’t just struggling on the course, he was struggling to get comfortable with his training. His body was not right and he pulled out of the Arnold Palmer Invitational and the Players Championship, two events he normally plays.

And remember at the Genesis Invitational Riviera? Woods made the cut but limped his way throughout the weekend en route to finishing dead last. What can we expect from Tiger this season? A cautious return in July and ramp up for September and the fall.

One of the most polarizing pros in the game decided to completely lean into weight and muscle gain. The result? An absolute success in both departments. But how about the golf? Don’t forget that Bryson DeChambeau had become one of the best drivers in the world earlier this year, and the rest of his game followed with three straight top-5 finishes in the spring. And then, a forced break.

Now, Bryson returns to the forefront at a bunch of events where he has succeeded in the past. The RBC Heritage, the 3M Open, the Memorial tournament. It could quickly become the summer of Bryson.

8. Olympic qualifying was postponed, creating a sweepstakes next season

When golf last left off, we were seeing one helluva competition for the American Olympic qualifying spots. We had Brooks Koepka and Justin Thomas kinda locked in, followed by a free-for-all between Patrick Reed, Patrick Cantlay and Webb Simpson, followed by Tiger Woods, Xander Schauffele and Bryson DeChambeau. All of those men competing for four spots. Well, that competition will take much longer to sort out now that the Olympics have been postponed to 2021.

But fear not, this is a good thing! Recall how many people saw Woods’ skipping tournaments as an indication he didn’t care to qualify for the Olympics. Now, we’ll probably get a really good idea. Between now and the end of qualifying in 2021, we will have six (6!) major championships, the Players, three playoff events and a handful of WGCs. It is going to be a wild points race over the next 12 months.

9. Will the perils of Jordan Spieth continue?

If you’re confused, imagine what Spieth is going through. In the time since we last saw him play, we had Brandel Chamblee saying that Spieth’s coach might not be the right guy. We had Gary Player promise he could fix Spieth and return him to No. 1 in the world … in one hour! This week, Jordan Spieth in his home state, at a course he’s played incredibly well on. Is there someone else you’d rather see win this week? We’ve got no one ranked higher.