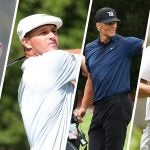 Brady and Mickelson and Rodgers and Bryson, oh my!

Golf’s finest made-for-television product has been given a third encore, and this time, the entertainment couldn’t be higher. On Tuesday, four of the sports world’s most excitable figures meet for an 18-hole battle in The Match 4. Two Hall of Fame quarterbacks and two PGA Tour stars (Phil Mickelson and Tom Brady vs. Bryson DeChambeau and Aaron Rodgers) will square off at a never-before-seen venue in America’s wild west.

Below, find the five storylines we can’t wait to see play out when Phil and Tom tee it up against Bryson and Aaron on Tuesday night.

1. What can we expect from The Reserve?

Unquestionably the biggest storyline at The Match 4 (with all due respect to Bryson DeChambeau) is the golf course. The newest iteration of the Match brings the event to a relatively unknown golf course in a remote portion of the country: The Reserve at Moonlight Basin in Big Sky, Montana.

The course is unlike anything we’ve ever seen (or teed up at) — a 7,800-yard behemoth at 7,500 feet of elevation from the folks over at Nicklaus Design. The course opened five years ago, and has seen no professional play (or made-for-TV matchplay events) in the time since. From photos, we can tell that The Reserve is a hilly, undulating test set into jaw-dropping scenery. It also most certainly fits the bill of the players it is hosting — featuring a 777-yard par-5 and several other mammoth tests of both distance and precision.

(ed. note: GOLF and Nicklaus Design are affiliates of 8AM Golf.)

The last time we saw Tom Brady tee it up at The Match, we witnessed the GOAT in a brand-new light: as a golfer with first-tee jitters. In THAT Match — against Tiger Woods and Peyton Manning — the seven-time Super Bowl champ emerged from a weather delay in time for a shaky start at the Medalist, pumping a handful of drives into the furthest reaches of the property.

But just when it seemed like it was time to consider if Brady might finally have found his kryptonite, he holed out an approach shot from the fairway (and stuck the landing by getting his pound of flesh from Charles Barkley in the process).

Can Brady adjust to the jitters en route to a bounce-back performance at Moonlight Basin? How about to the cameras? Only time will tell for the former, but his performance on James Corden’s “Carpool Karaoke” has us feeling optimistic about his performance for the latter.

In the handful of years since its inception, the Match’s biggest calling card may be a lack of one. From changing formats and players to various locations, there have been only two constants: Phil Mickelson, and the tournament broadcast, which has aired on Turner’s family of networks. But even that has changed. The first tournament was strictly a pay-per-view event, while later iterations of the show have been available to the public on cable television.

The Match broadcast has also earned high marks during that time for its commitment to taking viewers inside the action by utilizing unique technology and focusing heavily on each of the players involved.

This year, the broadcast will shift again — adding a new-look team of on-air talent to help share the action. While previous versions of the broadcast sought to capture some of the gusto around TNT’s NBA product by featuring a steady point man (Brian Anderson) alongside colorful personalities, this year’s product will look more like Inside the NBA — an analyst (and entertainment) driven product. For the broadcast, Larry Fitzgerald and Cheyenne Woods will join Charles Barkley in the booth.

Viewers can tune in beginning at 5 p.m. ET on TNT.

Of course, Rodgers is mired in one of the NFL’s biggest quarterback controversies, a situation that dates back to 2020, when his current team (the Green Bay Packers) drafted his heir apparent, Jordan Love, in the first round of the NFL Draft in lieu of immediate help. Rodgers has reportedly been unhappy with the team’s handling of the Love situation, and has been rumored to be on the trade block, or considering holding out until the situation is resolved. Still, we haven’t heard much of anything from the quarterback himself since the information first became public in late May.

For DeChambeau, the questions surround the abrupt departure from his caddie, Tim Tucker, with whom he partnered for the majority of his professional career (including his win at the 2020 U.S. Open). Tucker and DeChambeau played the practice rounds together at this week’s Rocket Mortgage Classic before announcing the decision to part in a terse announcement on Thursday morning. Bryson went on to miss the cut at the Rocket Mortgage, and skipped his media availability, neglecting to answer any questions about the situation in the process.

It’s unlikely we’ll get all (or any) of the answers to either situation on Tuesday, but you can bet that keen observers will be watching both of these players closely.

5. Who will earn the title of “biggest bomb-hitter”?

It’s a battle as old as time. Phil Mickelson, the self-professed hitter of bombs, against Bryson DeChambeau, a tree-trunk-legged, barrel-chested bomber of other worldly proportions. Which one of the two big-hitters will emerge from the Match with the longest drive of the day? We’ll know soon enough.