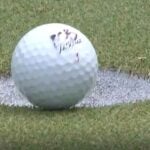 Rafael Cabrera-Bello's just before it fell in the 7th hole Friday at the 2020 Wyndham Championship.

On Friday at the 2020 Wyndham Championship, Rafael Cabrera-Bello’s golf ball dropped into the 7th hole for a birdie at least 25 seconds after it first came to rest on the edge of the cup.

Cabrera-Bello was not penalized for waiting the putt out, though some wondered why considering the length of time that passed before the putt went in.

Now we know to count Tour rules officials among those who questioned the lack of a penalty in Cabrera-Bello’s case.

Speaking to reporters on Friday, Cabrera-Bello revealed that rules officials met with him about the putt after his round. According to him, they thought he waited too long and deserved a penalty, and it took some convincing on his part to remain penalty-free.

“So what they wanted to speak to me about is they felt that I took too long to approach the hole,” Cabrera-Bello said Friday night. “We reviewed the footage and the referee said that it was so, so close and so tight, but they wanted to know if I have deliberately to slow down my walk to the hole and I told them that I didn’t, I slowed down because I saw my playing partners walking in.”

According to Rule 13.3a, in such a scenario players have a reasonable time to walk up to the ball and then 10 more seconds to wait for it to fall. If it falls in after that time, the golfer receives one penalty stroke.

Understanding that, the crucial question was whether Cabrera-Bello took a “reasonable” amount of time get to his ball. It seems that his explanation was enough to satisfy the rules officials on hand, and there remains a 2 on his scorecard for the 7th hole.

It’s a good thing too, because after another strong round on Saturday, Cabrera-Bello is contention to win it all on Sunday.

You can watch a video of his putt below.