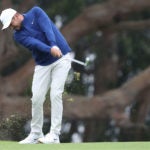 Jason Day hits a shot on the 14th hole at TPC Harding Park on Thursday.

The two-time defending champion had missed four cuts, withdrew from one tournament and had one top 10 in 10 events this PGA Tour season. The two-time defending champion was battling left knee pain. None of the tournaments were a major. The PGA Championship is. He tied for second last week. He’s tied for second this week. Here are three things you should know after Thursday’s first round at TPC Harding Park in San Francisco.

Jason Day has finished no worse than tied for seventh over the past month. Brendon Todd has won twice and three other times held the lead entering the final round this season. They’ve been hot. They stayed hot.

Day shot a 5-under 65 in the morning and Todd shot a 65 in the afternoon to share the first-round lead. Ten players fired a 66, including two-time defending champion Brooks Koepka, and eight players shot a 67.

“Yeah, so there was definitely a lot of momentum coming in off the previous finishes that I’ve had, three top 10s, which has been nice,” Day said. “The game feels like it’s coming around. I’m pleased with it.”

Brooks Koepka is one stroke back

Koepka has won seven PGA Tour titles. Four of them have been major championships. Three of them have been regular-season events. He had been trending down before last week. He is now just continuing the trend.

Koepka bogeyed his second hole, then birdied his fourth, fifth, seventh, ninth, 11 and 13th holes on his way to the 66. Tied for second with him were Scottie Scheffler, Martin Kaymer, Xander Schauffele, Bud Cauley, Zach Johnson, Justin Rose, Brendan Steele and Mike Lorenzo-Vera.

“I mean, it’s only 18 holes right now,” Koepka said. “I feel good. I feel confident. I’m excited for the next three days. I think I can definitely play a lot better, and just need to tidy a few things up, and we’ll be there come Sunday on the back nine.”

DeChambeau ripped a drive on the 7th hole. His clubhead then ripped off.

After his drive, DeChambeau leaned on his club to balance while picking up his tee. But the 40 pounds he has added to his frame in the past year appeared to be too much for his driver shaft, which snapped beneath his weight just above the clubhead.

Fortunately for DeChambeau, he didn’t have to finish the day without a driver, thanks to a recent USGA rule change allowing broken clubs to be replaced if they were not broken in anger, such as by slamming a club.

'It's very frustrating': Rickie Fowler opens up on recent slump