3 things to know after Round 3 of the RSM Classic 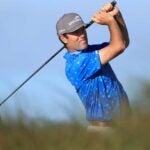 Robert Streb fired a three-under 67 in Round 3.

They’re through three rounds at the RSM Classic, and the competition is heating up. Robert Streb holds the lead after a third-round 67, but with optimal scoring conditions projected for the final round, he’ll have to keep pouring in the birdies if he wants to walk away victorious.

Here are three things to know heading into the final round. With a third-round 65 in Sea Island, Zach Johnson has given himself a chance heading into Sunday — and that’s a rare thing these days for the 44-year-old. Since his victory at the 2015 Open Championship, Johnson has yet to find the winner’s circle again as his prime years look well behind him. But with a six-birdie performance on Saturday, he has a chance to hoist a trophy yet again.

“The bottom line is you still have to go out and execute shots,” he said after his round. “I’m giving myself opportunities and good looks … I think patience is going to be key and obviously just sticking to my keys.”

After birdieing three out of his last five holes, he’ll be in the final group tomorrow as he chases his 13th career Tour victory, and his first in the state of Georgia since his improbable win at the 2007 Masters.

Camilo Villegas still in the mix

When he was warming up on the range Thursday, Camilo Villegas saw a rainbow. It reminded him of his late daughter Mia who tragically passed earlier this year after a bout with cancer.

“I got on the range and see a little rainbow out there. I start thinking about Mia and said, ‘Hey, let’s have a good one,'” he said Thursday. ” She loved colors and rainbows … It was a nice way to start the day.”

He’s carried those good vibes with him throughout the week as he fired rounds of 66 and 64 — his lowest 36-hole total in his Tour career — to get himself into contention. Saturday was more of a struggle for the 38-year-old as he shot even-par 70, but sitting just five shots back, he’ll have an outside chance at claiming the title on Sunday.

On the strength of a 43-hole bogey-free streak, Streb owns a three-stroke advantage heading into the final round. Steady golf in blustery conditions buoyed his round Saturday as he kept the ball in front of him and built his lead.

If he hopes to close out the victory, he’ll has to stave off a host of challengers. Six players are within five shots of the lead including Tour winners such as Kevin Kisner and Kyle Stanley.