The rarely used rule that let a major champion take a mulligan (again!) 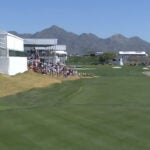 Zach Johnson on Friday on the 17th hole at TPC Scottsdale.

Zach Johnson stepped back from his ball, and you could almost hear your golf buddy after what came next.

And then two, three, four and five.

If that sounds familiar, you probably know the gaffe. Yes, Johnson accidentally hit his ball during Friday’s second round of the WM Phoenix Open, walked over to it, then hit it four more times to move it back to its original spot. But no, Johnson was not taking his sixth — or worse — stroke after he re-teed his ball on the 17th tee box at TPC Scottsdale. Here’s why.

(And if anyone knows the particulars of the rule here, it’s Johnson. More on that in a sec.)

It was Johnson’s tee shot, and that’s the essential part. The rule in play that let the two-time major champion hit his ball penalty free in this case is Rule 6.2b (5), which states: “Whether the ball is teed or on the ground, when starting a hole or playing again from the teeing area under a Rule: The ball is not in play until the player makes a stroke at it, and the ball may be lifted or moved without penalty before the stroke is made.

“If a teed ball falls off the tee or is knocked off the tee by the player before the player has made a stroke at it, it may be re-teed anywhere in the teeing area without penalty.”

Johnson was good, and he hit his actual tee shot 292 yards — about 280 yards longer than when he dribbled his ball off to the left on the slip-up. Of course, if you’re swearing you remember Johnson once taking another tee shot mulligan, it’s because he did.

During the second round of the 2019 Masters, Johnson took a practice swing just to the left of his ball on the 13th tee, he accidentally hit it, and it struck the right tee marker before rocketing it off to the left. And there, too, he could re-tee without penalty.

For conversation sake, what would happen if Johnson accidentally hit his ball elsewhere on the hole? On the green, he’s also good. There, he’s covered under Rule 13.1d (1), which states: “There is no penalty if the player, opponent or another player in stroke play accidentally moves the player’s ball or ball-marker on the putting green.”

But if Johnson accidentally hit his ball anywhere else, it would be a penalty under Rule 9.4. A 2019 article from the USGA’s website described that scenario this way: “This category would include a ball that lies in a bunker, a penalty area, or anywhere in the general area (defined as anywhere on the golf course that is not the teeing area, the putting green, a bunker or a penalty area). When your ball lies in any of these areas, it is already in play. If you then take a practice swing and cause your ball to move, you still have not made a stroke, but you will get a one-stroke penalty for moving your ball in play. The ball must be replaced on its original spot. This is covered under Rule 9.4.

“If the player instead plays the ball from where it was moved to after their practice swing, it becomes a two-stroke penalty (or a loss-of-hole penalty in match play) and the player may or may not be required to correct their mistake (see Rule 14.7 for more information).”