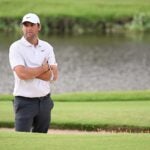 Scottie Scheffler on Friday in a bunker on the 13th hole at Southern Hills.

Playing his favorite course? Yes. Winner of four of his past eight events? Yes. Winner of the Masters? Yes. World No. 1? Yes. Overall good guy? Yes, Scottie Scheffler is that, too.

But is he playing on the weekend at the PGA Championship?

What happened? Golf. The game stays undefeated at giving one tournament and taking the next. Scheffler had entered this PGA Championship on a heater, but leaves with a whimper. He shot rounds of one-over 71 and five-over 75 — with a second-nine 40 — and missed the cut, set at four over, by two shots. (The PGA’s cutline is top 70 and ties, FYI.)

Unsurprisingly then, Scheffler leads our list of the 10 surprising golfers who MC’d at the PGA Championship.

What he shot: WD

Surprising because: What a year it’s been for Lefty. Let’s move on.

Surprising because: For a hot second on Thursday, the 1991 champ and fan favorite was leading. But after sitting at two under through 13 holes, Daly played eight-over golf after that. The Tulsa casinos aren’t complaining.

Surprising because: If you believe in storylines, you’d believe that one of these players rumored for the upcoming Saudi series would make a run.

Surprising because: The 21-year-old’s already a two-time winner on the formerly named European Tour. He, along with twin brother Rasmus, should be playing on European Ryder Cup teams for the next 20 years. But Nicolai won’t play on Saturday and Sunday in Tulsa.

Surprising because: He can hit it a mile and had been playing well (T10 at the Masters; T6 at the Mexico Open; T38 at the Byron Nelson) coming in. But he played Southern Hills 1st hole at two under — and the others at 12 over.

Surprising because: He’s made only four of nine cuts this year, but Wolff has as much game as anyone. He was also playing in the state (Oklahoma) where he won a collegiate national championship (Okie State).

Surprising because: A talented ball-striker, the 2021 Ryder Cupper appeared in line to make a run. But he made just one birdie — and 10 bogeys and two double bogeys.

Surprising because: With Scott’s idyllic swing, he’s a contender everywhere he puts a peg in the ground. Not this week. A quadruple-bogey 8 on 17 during the first round doomed him.

Surprising because: No, DJ is no longer in his world-beater form of 2020. But he’s better than a pair of 73s, and just four birdies.

Surprising because: Cantlay seemed custom-made for Southern Hills. He was in good form, too, with a win at the Zurich Classic (with partner Xander Schauffele), and a runner-up finish at the RBC Heritage. At Southern Hills, Cantlay made a whopping 13 bogeys. Shocking.

Surprising because: We’ve discussed this above, but we’ll offer more detail on his final nine holes. Starting on the back nine, he was at even par standing on 1 tee. Scheffler then went bogey, bogey, par, birdie, par, bogey, par and double — for a 40. Wow.