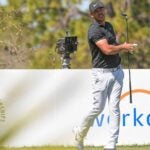 Brooks Koepka is only one shot back after the first round of the 2021 WGC-Workday Championship.

The 2021 WGC-Workday Championship at The Concession Golf Club continues on Friday, February 25. You can find full second round tee times at the bottom of this post.

Notable groupings for WGC-Workday Championship Round 2

It’s a jam-packed leaderboard in Florida, where 24 players are within four shots of the lead after the first round. The leaders, Webb Simpson and Matthew Fitzpatrick, are 6 under par, and a bevy of big names — Brooks Koepka, Sergio Garcia, Jon Rahm, Patrick Reed and Rory McIlroy among them — is poised to strike on Friday.

Simpson charged into a share of the lead by birdieing three of his last four holes. He’s seeking his eighth career win this week. Fitzpatrick was steady all day, turning in a bogey-free scorecard that featured four of his six birdies on the course’s back nine. Fitzpatrick is still seeking his maiden PGA Tour victory, though he does have six international wins on his resume since 2015.

Simpson will teed it up alongside Round 1 companions Collin Morikawa and Joaquin Niemann on Friday at 12:37 p.m. ET while Fitzpatrick will play in the day’s second-to-last grouping at 12:59 p.m. ET with Xander Schauffele and Adam Scott.

Check out the full second round tee times for the 2021 WGC-Workday Championship below.