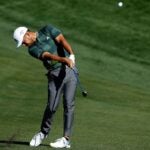 Xander Schauffele hits a shot on Saturday on the 2nd hole at TPC Scottsdale.

Schauffele’s drought may not be as pronounced as, say, Jordan Spieth’s. The former world No. 1’s winds back to the 2017 Open Championship. But Schauffele’s just as thirsty.

“A lot,” Schauffele said Saturday when asked what a win at this week’s Waste Management Phoenix Open would mean. “I think just a sense of accomplishment, relief. You know, it’s good. This is sort of what I needed to do. I’ve been talking about how consistent I’ve been playing, and I just need to put myself in this position more often.

On Sunday, Schauffele and Spieth will stand side-by-side as they seek to stop their skids. They share the lead at 18 under entering the final round and will tee off last, at 1:20 p.m. ET, along with Scottie Scheffler, who’s three shots back. Also at 15 under is Kyoung-Hoon Lee, and he will tee off second-to-last, at 1:09 p.m., along with Justin Thomas and Louis Oosthuizen, who are both 14 under.

“I think it’ll be fun,” Schauffele said of his grouping with Spieth. “We’re both trying to do the same thing. We both have a lot to prove. He’s accomplished so much in his career. I’m still trying to push forward and do kind of what he’s done in a short time.

“I think it’s cool that we’ll be hashing it out tomorrow.”

The fourth-round tee times are below. Golf Channel will broadcast the tournament from 1-3 p.m. ET, and NBC will continue the coverage starting at 3.

How to bet on the Waste Management Phoenix Open — risk free!