Why Scottie Scheffler was forced to retire a decade-old club 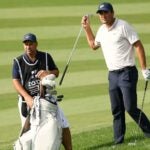 Scottie Scheffler is contending at the halfway point of the Sentry Tournament of Champions with a last-minute addition to his bag.

Scottie Scheffler is quickly becoming a household name. The 24-year-old is coming off an incredibly successful rookie season, which included seven top-10s and a trip to the Tour Championship — not to mention a solid run at the PGA Championship, where he finished T4.

Scheffler is among the lucky few who qualified for this week’s Sentry Tournament of Champions via a special exemption that included every player who made the the 2020 Tour Championship field, as opposed to just the past year’s winners. So far, he’s capitalizing on the opportunity, sitting at T10 at the tournament’s halfway point after firing rounds of 70-66. As a first-timer to Kapalua, Scheffler’s success so far is remarkable, but even more so when you consider he’s playing without a beloved club that has been in the bag for the better part of a decade: his Nike VR Pro.

“My trusty 3-wood cracked on Saturday on the range at Royal Oaks, and right now I got a Callaway one in there,” Scheffler said after his round on Friday. “I think [the Nike club] came out in, like, 2011.”

Back in 2011, Scheffler wasn’t even old enough for a driver’s license. He said he put the club away for a couple of years while he was in college at the University of Texas, but it’s been back in the bag for the entirety of his pro career.

Unfortunately for Scheffler, Nike announced it was exiting the clubmaking business back in 2016, which forced its roster of athletes — including Tiger Woods — to put other equipment in play. Luckily, Scheffler was prepared with a backup plan.

“I had my wife pick up about 10 3-woods from the house that were all backups and she brought them to the range and we found something that could work for the week,” Scheffler said.

Though the new 3-wood appears to be working well for the time being, Scheffler acknowledged the old Nike will be hard to replace.

“The way that the club set up, it was really square, it was really clean, not a lot of loft so I was able to flight it down pretty easily and it was softer than the new 3-woods and for me that’s important,” Scheffler said. “And when I wanted to hit it far, I just teed it up a little higher, hit it higher on the face. I got to know the club really well and for me I knew exactly what I needed to do with it each time.”