2021 Tour Championship live coverage: How to watch Round 3 on Saturday 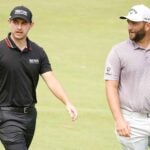 Patrick Cantlay and Jon Rahm have played a lot of golf together over the past few weeks.

Things are starting to get serious at the 2021 Tour Championship, with Round 3 set to start on Saturday, September 4. Here’s what you need to know to watch the third round on TV or online.

Patrick Cantlay and Jon Rahm began to pull away from the field on Friday, with Cantlay leading the charge at 17 under, and Rahm right behind him at 16 under. Five shots behind Rahm is Bryson DeChambeau, who is in solo third at 11 under.

Cantlay and Rahm will tee it up together in Saturday afternoon’s final pairing at 3:05 p.m. ET. DeChambeau and Justin Thomas will be just ahead of them at 2:55 p.m. ET, and Tony Finau and Kevin Na will play third-to-last at 2:45 p.m. ET.

Below you will find everything you need to watch the third round of the 2021 Tour Championship on Saturday.

How to watch Tour Championship Round 3 on TV

Golf Channel will open the coverage for the third round of the 2021 Tour Championship with a telecast from 1-2:30 p.m. ET on Saturday. Then NBC takes over for a four-and-a-half hour broadcast from 2:30-7 p.m. ET.

How to stream Tour Championship Round 3 online

SIGN UP FOR PEACOCK PREMIUM TO WATCH THE TOUR CHAMPIONSHIP, THEN ENJOY EVERYTHING THE PLATFORM PROVIDES