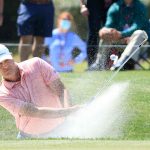 Stewart Cink hits out of a bunker on Saturday on the 5th hole at Harbour Town Golf Links.

Stewart Cink, over his 20-plus-year career, has played with the lead in the final round before. Two things, he says, have happened.

“I’ve certainly been nervous and thrown up on myself, and I’ve also played great in that situation,” he said Saturday.

Through 54 holes at the RBC Heritage, he’s done only the latter.

Cink opened with an eight-under 63 at Harbour Town Golf Links, followed it up with another 63, then shot a 69 on Saturday to build a five-stroke lead over Collin Morikawa entering Sunday’s final round. Cink and Morikawa tee off at 2:10 p.m. ET in the final pairing, and they’ll be preceded by Emiliano Grillo, who is six shots back, and Matt Wallace, who is seven behind, along with Sungjae Im.

“That’s a fun part of playing this game,” Cink said of the pressure. “I was in this situation one time about 17 years ago at Firestone in what used to be the Bridgestone World Golf Championship. I remember sleeping little that night, and I’m a little different person now, and I think I’m treating this whole tournament with a little bit more gratitude, and it’s been sort of a stop and sort of pinch myself along the way and enjoying it more than I’m fretting over it.

“But it’ll still be a roller coaster tomorrow emotionally, and it’s going to be a fun challenge to embrace that instead of fighting against it, creating some kind of a conflict.”

The fourth-round tee times are below. Golf Channel will broadcast the tournament from 1-3 p.m. ET, and CBS will continue the coverage starting at 3.

How to bet on the RBC Heritage — risk free!