2021 Memorial Tournament live coverage: How to watch Round 2 on Friday 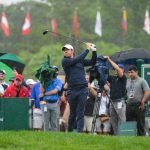 Bad weather prevented Rory McIlroy from playing more than a couple of holes at the Memorial Tournament on Thursday.

The annual Party at Jack’s Place — aka, the Memorial Tournament at Jack Nicklaus’ Muirfield Village, continues on Friday. Due to two lengthy dangerous-weather delays, only about half the field managed to finish the first round on Thursday, so Friday will be jam-packed with golf from sun-up to sundown as the players finish their opening round and head right back out for their second. Here’s what you need to know to watch the second round.

Defending champion Jon Rahm is playing in a star-studded grouping alongside Xander Schauffele and Collin Morikawa. The trio was out early enough on Thursday to complete their first round, and didn’t disappoint. Morikawa is leading the field after firing a round of six-under 66. Schauffele is two shots behind at four-under, and Rahm is three-under.

Also in the mix: Max Homa, Justin Thomas and Rickie Fowler, each of whom is also three-under. Rory McIlroy, Bryson DeChambeau and Jordan Spieth only finished a couple of holes before play was called for the day.

How to watch Memorial Tournament Round 2 on TV

Golf Channel will air the action for the second round of the 2021 Memorial Tournament with four hours of coverage from 3-7 p.m. ET on Friday.

How to stream Memorial Tournament Round 2 online

How to bet on the Memorial Tournament — risk-free!