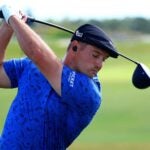 Bryson DeChambeau has a one-shot lead after 36 holes at the 2021 Hero World Challenge.

The third round of the 2021 Hero World Challenge gets underway Saturday morning in the Bahamas. You can find complete Round 3 tee times for the tournament at the bottom of this post.

What a difference a day makes. Four-time major champion Rory McIlroy was one of three co-leaders to fire an opening six-under 66 on Thursday, but after a lackluster 71, he fell back to T8. Instead, it was Bryson DeChambeau who torched Albany in the second round, carding an incredible 10 birdies to sign for an eventual 64 (-8).

DeChambeau now leads the star-studded field by one shot at 11 under par overall. Right behind him: Collin Morikawa, Tony Finau and Brooks Koepka, who are tied for second at 10 under.

For fans hoping for an immediate rematch between DeChambeau and Koepka in a real tournament setting, Saturday’s third round will unfortunately not be the day. DeChambeau will play in the final pairing at 1:04 p.m. ET alongside Morikawa while Koepka will tee it up in the penultimate pairing with Finau at 12:53 p.m. ET.

Also in the mix: Daniel Berger, two shots back at nine under, and Sam Burns and Tyrrell Hatton, who are three shots back at eight under. Check out complete third-round tee times for the 2021 Hero World Challenge below.

How to bet on the Hero World Challenge

How tough were Abu Dhabi conditions? ‘I’ve never been so glad to get off the course’