Down to the wire! Why the LPGA season finale has so much on the line 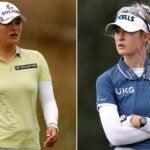 The stakes are high Sunday for Jin Young Ko, left, and Nelly Korda.

The LPGA Tour has played 28 events this year, and it’s holding its 29th, and final, tournament this week. Hundreds of players have taken thousands of shots. And yet, Sunday’s 18 holes at the CME Group Tour Championship will be more than a victory lap. Here are three things you need to know after Saturday’s third round at Tiburon Golf Club in Naples, Fla.

Four are tied for the lead

Along with the tournament title, Player of the Year is also on the line, and the POY leaders are also tied for first at the CME.

Let’s review the tournament leaderboard first. Nelly Korda, Jin Young Ko, Nasa Hataoka and Celine Boutier, at 14-under, are tied for the lead. One shot back are Gaby Lopez and Mina Harigae, and Leona Maguire, Nanna Koerstz Madsen and Lexi Thompson are two behind.

Hataoka, who played her final 10 holes at eight-under, had the day’s low round, with an eight-under 64, and she’ll play with Korda and Ko in Sunday’s final grouping.

Korda, Ko in fight for Player of the Year

The season-long contest for Player of the Year also will be determined on Sunday. Korda, with four victories this season (not including her win at the Olympics) and 191 points, leads, and Ko, also with four wins, is in second, with 181 points. Should either win, they’ll win POY, too.

If neither do, here’s where it gets interesting. Ko can overtake Korda by finishing second (and earning 12 points) and Korda finishing 10th (one point) or lower (no points). The two will tie if Ko finishes second and Korda finishes ninth (two points). For all other scenarios, Korda will become the Player of the Year.

“Yeah, it’s for other people,” Korda said when asked whether she’s caught up in the drama ahead. “I’m just out there going to do my job, taking a shot at a time, and see where it takes me. That’s all you can do.”

It was revealed on Friday that Ko has been dealing with left wrist pain since May, and it’s worsened to the point where she has gone without warming up this week. But it’s not exactly like you would notice. She opened with rounds of 69 and 67, then birdied holes two through eight on Saturday on her way to a 66.

“Yeah, she said she hasn’t done a single warm-up since last week as well,” said Lydia Ko, Jin Young Ko’s playing partner on Friday. “Yesterday I said, did you warm up today? She was like, no, I didn’t. Injuries are no fun. You know, golf is hard enough playing with 100 percent health and beautiful weather, but to have lingering injury, it’s one thing to just feel pain, but when you know at the back of your mind that you could feel pain, you kind of back out of it.

“So the level of golf she’s been playing with that shows she’s a grinder, and, yeah, you know, hopefully we all finish the season off strong.”

How to watch the final round

Sunday’s final round will be broadcast (live!) on NBC starting at 1 p.m. ET.