2021 BMW Championship live coverage: How to watch Round 2 on Friday 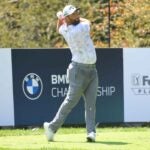 Jon Rahm got off to a hot start Thursday at the 2021 BMW Championship.

The 2021 BMW Championship — and the FedEx Cup Playoffs — continues on Friday with Round 2 at Caves Valley Golf Club in Maryland. Here’s what you need to know to watch the second round on TV or online.

Jon Rahm is in the FedEx Cup driver’s seat. He may be ranked No. 2 in the standings heading into this week, but the hottest golfer on the planet got even hotter on Thursday at the BMW Championship. Rahm blitzed the front nine to the tune of a 31, then continued the hot streak on the back, finishing the opening round with an eight-under 64 to tie Rory McIlroy and Sam Burns for the 18-hole lead.

That projects him firmly into No. 1 in the standings, and it might not even take a win this week to put him in the top spot at the Tour Championship.

For Friday’s second round, Rahm will tee off at 1:43 p.m. ET, once again playing alongside Cameron Smith and the current FedEx Cup leader Tony Finau. Below you will find everything you need to watch the second round of the BMW Championship on Friday.

How to watch BMW Championship Round 2 on TV

Golf Channel will carry the second round of the 2021 BMW Championship with four hours of coverage from 3-7 p.m. ET on Friday.

How to stream BMW Championship Round 2 online

How to bet on the BMW Championship