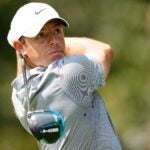 Rory McIlroy hits his tee shot on Thursday on the 2nd hole at Caves Valley.

Rory McIlroy, after averaging nearly 320 yards off the tee, hitting his 3-wood almost just as long and dropping putts all over Caves Valley, made one wonder:

What else does he have in his garage?

“But yeah, there is — I’ve got a few things in there, and every so often, something catches your eye, like, oh, I remember that, or I’d like to try that again.”

Such is the life of McIlroy, where 300-yard 3-woods sit next to the weed wacker.

On Thursday afternoon, McIlroy made seven birdies and an eagle, tied his lowest round (64) of the year and shared the first-round lead at the BMW Championship. Just three days earlier, during the final round of the Northern Trust, you likely wouldn’t have seen it coming. Much like a tree likely wasn’t with McIlroy’s old 3-wood. So despondent was McIlroy at the club that he deposited it somewhere near the 9th tee box at Liberty National.

So after a flight back home to Florida, he went digging.

Indeed. Still, while a different 3-wood was necessary, why the need to switch up the driver and putter? The driver reasoning was a bit technical. “I just had a driver I felt was spinning a little too much, so a couple of times last week into the wind, I’d hit it and it would balloon up in the air and then if I wanted to try to hit a cut off the tee, I was not comfortable doing it because I felt like I was losing too much distance by hitting the cut,” he said.

The putter decision was based on technology.

“The putter, I sort of — it’s funny, I thought about it, I said to [caddie] Harry [Diamond] after the first round last week, I’m thinking about going back to the Spider, and then I proceeded to gain four strokes on the greens over the next two days with the blade.

“But I think the thing with the blade is the good days are really good, but the bad days are pretty bad, as well. There’s quite a lot of inconsistency in it for me. It’s almost like I need to practice with the blade at home because you have to get your stroke spot-on to hit good putts with that style of putter.

“But then when I come out here, I started hitting putts with the Spider again, and it felt so easy. Felt like I couldn’t not start it on line. It was, sort of, there’s a lesson in there somewhere about maybe just keeping the blade at home and practicing with it and then coming out here and putting with something that’s got a little more technology in it.”

Three clubs, from the bench to the starting lineup to the top of the leaderboard.

Still, McIlroy swore that his garage isn’t as cluttered as it would sound.

“In terms of what I can actually play with, like current product, I don’t have that much,” he said. “I sort of try to keep it to a minimum because I know if I have too much stuff, I’ll just start to tinker, and that’s not a good thing.”

'Was wondering who that was': Pro pranked by PGA Tour, granted ‘sexiest golfer’ wish