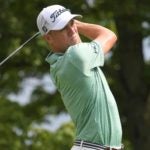 Justin Thomas is within striking distance of the lead heading into the third round of the 2020 WorkDay Charity Open.

We’re at the halfway point of the 2020 WorkDay Charity Open, and Saturday is setting up to be a memorable round at Muirfield Village Golf Club. You can find full third round tee times for Saturday at the bottom of this post.

What to watch for Saturday at the Workday Charity Open

Two names at the top of the leaderboard will garner a ton of interest during Saturday’s third round in Ohio. World No. 5 Justin Thomas birdied three of his final six holes to shoot a 66 on Friday and reach 10 under for the tournament. JT already has two wins on the season, and will try to put himself in position for a third on Moving Day.

But Thomas will have to get past a younger rising Tour star to do it. Collin Morikawa continued his stellar play since the PGA Tour returned to action last month, matching Thomas’ 66 on Friday to get to 13 under, good enough for a three-shot lead. Morikawa lost in a playoff at the Charles Schwab Challenge, then missed the first cut of his Tour career at the Travelers Championship. Morikawa and Thomas will play in the final group on Saturday alongside Kevin Streelman, beginning at 1 p.m. ET.

Accomplished players like Patrick Reed, Hideki Matsuyama, Viktor Hovland, Matt Kuchar and Ian Poulter will also be in the mix on Saturday, while Phil Mickelson and Rickie Fowler will have earlier tee times after narrowly making the cut.