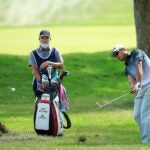 Hideki Matsuyama hits a shot on the 10th hole at Olympia Fields Golf Club while caddie Shota Hayafuji looks on.

He’s been last in little else over the past month.

A tie for second at the PGA. A win at the Northern Trust. A tie for the lead at the BMW.

Johnson and Hideki Matsuyama share a two-shot lead at the BMW and tee off at 2:55 p.m. at Olympia Fields Golf Club just outside of Chicago. Two of the three golfers tied for second, Joaquin Niemann and Mackenzie Hughes, tee off at 2:45 p.m., and the third, Adam Scott, begins at 2:35 p.m.

The fourth-round tee times are below. The Golf Channel will begin coverage of the tournament from 1-3 p.m. ET, and NBC will continue coverage from 3 p.m.-7 p.m. ET.