GOLF’s 2019 Turkey Awards: Honoring the most unfortunate, cringiest moments of the year 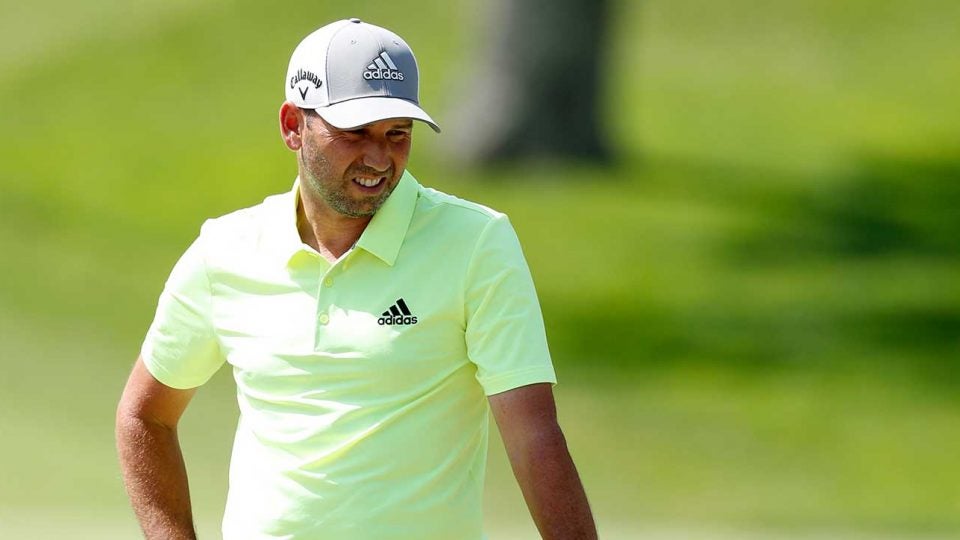 It was an odd year for Sergio Garcia.
Getty Images

Dark meat. Light meat. How do you like your turkey? At GOLF.com, we prefer it served as a digital roundup of the year’s most dubious achievements in golf. In the spirit of the season, we give you our annual Turkey Awards.

After blasting from a bunker, Tour pros aren’t expected to rake the sand. But they’re also not expected to trash it altogether, as Garcia did when he regressed into a tantrum-throwing toddler at the Saudi International, stirring up a sand storm with his sand wedge. Oh, and it was also in that same tournament that he damaged several greens with his club, which led to a “serious misconduct” and, eventually, a disqualification.

In a case of life imitating film, Pepperell played the role of Tin Cup during the third round of the Turkish Airlines Open, when he pumped a ball into the water on 5th hole. Then another. And another. And another. The plot twist came when Pepperell exhausted his entire supply of balls and was DQ’d for failing to complete the hole.

Shooting a single round 131-over 202 at a U.S. Amateur qualifier is nothing to be proud of. But the real embarrassment for Bilardello is that he started out trying but then, after botching a couple of early holes, was deemed to have intentionally run up his score.

THE CAT GOT YOUR TONGUE AWARD FOR AWKWARD SILENCE

Shouting “fore” on a crowded golf course is not like yelling “fire” in a crowded movie house. You’re supposed to do it, at least when you hit an errant shot. Which made it all the stranger that Stanley reportedly failed to say a word — not once but twice, during the British Open — when his golf ball went whistling toward the gallery. This was according to Stanley’s playing partner, Scottish rookie Robert MacIntyre, who did not take kindly to the mime routine. To make matters worse, one of Stanley’s stray shots hit the mother of McIntyre’s caddie. Sorry, mom, he shouldn’t have stayed mum.

THE EVERYMAN AWARD FOR IMPERSONATING A WEEKEND HACK

Tour pros — they’re just like us! As when Johnson inadvertently clipped his ball with his practice swing on the 13th tee at Augusta during the second round of the Masters. The shot, which didn’t count as a stroke, caromed off a tee marker and rolled ingloriously to a stop some 10 yards away, forcing Johnson to make a walk of shame familiar to most duffers. He then went on to make birdie, so maybe not so much like us, after all.

THE WE AREN’T THE WORLD AWARD FOR CULTURAL INSENSITIVITY

“I’d go with Lee,” Hank Haney said on his SiriusXM radio show, offering his prediction for the winner of the U.S. Women’s Open. “If I didn’t have to name a first name, I’d get a bunch of them right.” The remark earned Haney a rebuke from Michelle Wie, among others. It also cost him his radio job.

In a brouhaha involving two Arkansas institutions, Daly took to social media to vent his displeasure over a bad shopping experience at his formerly favorite mega store. “I will never step foot into #Walmart again!” Long John tweeted. In his telling, the staff was “lazy” and only one full-service checkout line was open, leaving him to self-checkout with more than 100 items — some of which weren’t even Diet Cokes.

THE FROSTY THE SNOWMAN AWARD FOR MOST UNFORTUNATE 8

Hopes were high that McIlroy would make history at the British Open’s long-awaited return to his native Northern Ireland. What he made was a hash of his very first hole, carding a crippling quadruple-bogey 8 after pulling an iron O.B. off the tee.

Some say the Rules of Golf are too complex and arcane. But there was nothing esoteric about the dictate violated by Dye at the LPGA Q-Series this fall, when she requested info from another player’s caddie on what club that player had hit. Even casual golfers know that intel-seeking of that kind is a no-no. But apparently not Dye, who said afterwards that she’d been oblivious to the prohibition. Ignorance of the law is no excuse. But dang if it isn’t embarrassing.

Looking like a dour Bond villain trying out for Project Runway, Rahm was seen spectating at Center Court at Wimbledon in stylized threads that, depending on your viewpoint, were either cutting edge or tragicomic. Fellow Tour pro Thomas Pieters sure found the outfit funny, and said so with a gently mocking tweet. When Rahm responded to that ribbing with zero sense of humor, the solution became clear: if you’re that sensitive, stick to tennis whites.

THE ADAM SCHIFF AWARD FOR INCIDENTS THAT WARRANT CLOSER SCRUTINY

Did Mayfair play fair? Many golf fans were left to wonder in the wake of the PGA Tour Champions’ Invesco QQQ Championship, where the 53-year-old, five-time Tour winner committed two rules infractions in the span of seven holes. In both incidents, Mayfair’s description of events to tournament officials appeared to contradict what actually happened. What was in his heart, only Mayfair knows. But when as polite a voice as Lanny Wadkins calls you out on TV, you know the optics aren’t great.

THE CADDIES ARE PEOPLE, TOO, AWARD FOR LAYING INTO A LOOPER

“Two perfect shots, Michael. You got me in the water on one and over the green on the other.” That was Spieth, upbraiding his caddie, Michael Greller, on the 8th hole at Pebble Beach, during the first round of the U.S. Open, his every word picked up by Fox Sports microphones. Though Greller seemed unbothered, and later said he had no recollection of the incident, the Twittersphere was quick to jump on Spieth for dressing down his faithful sidekick on national TV.

It’s hard to say which was more agonizing: watching DeChambeau take more than two minutes to line up (and miss) an eight-foot putt at The Northern Trust, or listening to the press session in which he went to excruciating lengths to explain that he actually moves things along briskly.

First came a bow, followed by fist-bump. Though both players insisted that they weren’t up to anything (the LPGA Tour also ruled that there’d been no breach), appearances matter. And it appeared to many that Olson and Jutanugarn had engaged in a game of backstopping at the Honda LPGA Thailand — then celebrated an occurrence that was unfair to the field.

Even now, watching the replay, it’s hard not to cringe at the alternate history that was nearly written Friday at the Masters, when a security guard, rushing to shield Tiger Woods from the masses, slipped on rain-slicked turf and came this close to sending Woods back to surgery. In the end, it all worked out. Tiger hop-skipped the slide-tackle and went on to an historic win, and the security guard avoided becoming golf’s Steve Bartman. But he left us with a lingering image of a nightmare that might have been.