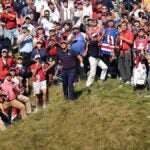 Bryson DeChambeau earned a half point on Friday, and he created lots of buzz in the process.

Day 1 of the Ryder Cup is officially in the books, as the U.S. leads Europe 6-2 at Whistling Straits. Now, finally, we can unpack some actual golf action. Here’s a collection of surprises, highlights, musings and more.

Reports on site were that the first-tee vibe fell a little flat this year, but at least the fans on site had time to turn it around. Beer sales started at 10 a.m., which likely helped.

McIlroy and Poulter were placed as the anchor match for a reason on Friday morning, yet they got absolutely crushed by Xander Schauffele and Patrick Cantlay. They were 5 down through five and had their chance to win their first hole on 8, but Poulter badly missed a par attempt. They tied the hole with bogeys. The duo didn’t win their first hole until they birdied the short par-4 10th to go 4 down and later lost 5 and 3. McIlroy also lost in the afternoon for his first 0-2 Ryder Cup day of his career.

Ten. 10! That’s how many greens in regulation the team of Sergio Garcia and Jon Rahm hit consecutively in morning foursomes, finding every one from Nos. 6-15. For a format as dicey as alternate shot — where it can be difficult to get in a rhythm and you need to rely on your partner to put you in positions to succeed — 10 greens in a row is silly good. It was almost 11 in a row, but Rahm left a chip just a few inches off the green on the par-5 16th. They won 3 and 1 over Jordan Spieth and Justin Thomas.

Ok, so was this really that much of a surprise? Maybe not, at least not with Bryson, but it’s still jarring to actually see him take on the line he did on the par-5 5th hole, swing like he’s already competing in the World Long Drive Championship and actually pull it off. After a 417-yard drive, he had just 72 yards to the hole and stuck it to four feet, leading to an easy eagle. First, to really put it in context, check out this graphic to see just how much he cut off:

And, now, in video form:

They didn’t necessarily play that poorly against a strong Garcia and Rahm team, but the Americans couldn’t drain as many key birdie tries as their counterparts. That was the difference in their 3-and-1 defeat. Spieth sat in the afternoon, and Thomas was paired with Patrick Cantlay. Thomas’ flatstick warmed up in the fourball, and he made some key putts late to help the U.S. secure a half point.

“If we play like that the rest of our matches that we have in our lifetime, I think we’ll be just fine because I know we are both better putters than that,” Thomas said. “And we hit a lot of good putts, just hit in a lot of spots that wasn’t too makeable with tough reads.”

Shot of the day!

Jordan Spieth, needing to pull off a crazy flop shot to have a chance of extending his morning foursomes matchup, did just that. Check it out below, as Spieth launched it 75 feet into the air and then had to prevent his momentum from taking him into one of the Great Lakes. Thomas missed the putt and they lost the hole and match anyway, but let’s appreciate the shot-making regardless.

“I’d like to say, I don’t think I exaggerated that fall, you know how steep that is,” Spieth said. “Once I started moving, I was like, I’ve got to keep moving until I find a flat spot.”

Steve Stricker said he wasn’t concerned about having six rookies on his roster, and he previously mentioned that Ryder Cup rookies are 40-29-17 since 2008. He was right. His rookies were 4-0 on Friday morning and 2-0-2 in the afternoon.

Both captains said they knew their lineup for Friday morning and Friday afternoon before that first day even started, yet it was still a surprise to not see one U.S. morning pairing repeated on Friday afternoon — especially the dominating duo of Schauffele and Cantlay. But second-guessing won’t do much here. The U.S. went 2-0-2 in the afternoon anyway.

About that first tee again…

One of the most exciting tee shots in all of golf — the first hole of a Ryder Cup — and we get this angle? Think of all the options. A view behind and high above with the massive grandstand, frenzied crowd, picturesque par-4 opener and Lake Michigan glistening in the background seemed like a better option. But hey, at least we got to see those shadowy faces lurking in the tunnel.

And then Bryson did it again…

On the par-4 13th, DeChambeau pulled driver, the crowd roared and he unleashed a massive blast into the left greenside bunker, measured at 392 yards. He made par, but the fans are absolutely going nuts anytime he pulls driver.

DeChambeau, after sitting in the morning, had a big front nine in fourballs, making two birdies and an eagle, but he also had one interesting moment on the 6th, when he was putting for birdie and his caddie, Brian Zeigler, tended the flag but suddenly couldn’t pull it as the ball inched closer. Due to strong winds and, well, some bad luck, the pin was stuck. You could see him riddled with panic — perhaps unsure of the ramifications — but DeChambeau’s ball eventually came to rest a few feet short. A rules official came out and helped wiggle the flag out, but it would have been no harm anyway. Due to a rules change in 2019, even if the ball hit the pin as the caddie was planning to tend it, it would have been accidental and no penalty. Zeigler’s moment of anxiety was for naught.

This is not important. That’s why it’s way down here at the bottom of this internet column. We know this is Rory’s go-to Ryder Cup look; apparently Cantlay is following in his footsteps as the U.S. representative. These little details are important.