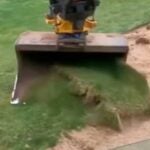 Shaping a bunker this well takes a talented excavator.

When we think of viral videos, we tend to picture cats, Kardashians and yodeling kids.

But this past week, the boundless world of click-bait delivered something different: an

The snippet, which has garnered more than half a million views, shows, in sped-up motion, the edges of a bunker being machine-groomed, the grass stripped bare, the hazard’s shaggy lip being cleaned and sharpened like a bearded patron’s face at a barbershop.

Or so it looks to us.

But what, exactly, is going on? How common is this type of project? When and why do courses do it? How sophisticated are the skills required?

Brian Chapin, the director of agronomy at Rolling Hills Country Club, in Springfield, Penn., has seen the video. We rang him up and asked him to dig in.

What exactly are we watching?

Described on the Instagram post as a bunker “stripping” project, the work is a common industry practice, Chapin said, part of routine maintenance and renovation projects. It involves stripping the sod from the faces of bunkers to remove sand build up, which can undermine the health of turf.

Why and when does this kind of work happen?

Bunkers aren’t carved in stone. They shape-shift over time, refashioned by the weather, and daily wear-and-tear. The video shows some of these effects along the high side of the bunker, which appears to have “thin, underperforming turf,” likely brought on, Chapin says, by a combo of prevailing winds and years of sand shots splashing against the face.

Over time, sand builds up under the sod along the edges. When that happens, Chapin says, it’s only a matter of time before turf begins to struggle, as it’s growing in stingy, sandy ground, with low moisture and nutrient levels. The cure is a strip job like the kind shown in the video. Though the frequency of this work varies from one property to another, courses usually do it every 3 to 5 years, “or earlier if needed,” Chapin says, assuming they have the resources.

Is it as hard to do as it looks?

The machine used in the video is an excavator, often referred to as a knuckle bucket, and its operator, Chapin says, is flashing the skills of a seasoned pro. There is subtlety to the job. Doing it right requires digging deep enough to tear up the turf but not so deep that you remove the topsoil, which can undermine the growing environment and contaminate the bunker sand with fine particles of dislodged soil.

“(The operator) is very talented,” Chapin says. “He does a nice job of delicately removing the grass without disturbing the underlying soil.” The people who build and renovate bunkers are known as ‘shapers,’ and the best ones, have the touch and eye of artists. “A lot of the really talented architects these days are also really accomplished shapers,” Chapin says.

What you didn’t see

Just as sand can build up under turf, so can turf encroach into sand. When that happens, maintenance crews will bust out the knuckle bucket and reestablish the original edge. “So that’s another part of the process,” Chapin says, though it’s not depicted in the video.

Got it? Good. Now, back to cats and Kardashians.