‘I’ve never seen that’: The stunning discovery a greenkeeper unearthed at his golf course 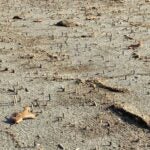 What lurks beneath the surface? On this tee box, thousands of broken tees.

Whether by filling divots, repairing pitch marks or smoothing footprints in the sand, we try to erase the evidence of our presence on a golf course.

But what about our impact underground?

At first glance, the striking photograph above looks like an aerial shot of a petrified forest. But on closer inspection, it offers a rare glimpse of the things we golfers leave beneath the turf.

Posted on Twitter by Scott Reynolds, the director of course operations at Charter Oak Country Club, in Massachusetts, the picture shows the tee box of the club’s par-3 3rd hole, in the midst of an off-season renovation. The grass has been torn up, exposing an apocalyptic landscape of broken tees.

“I was completely surprised,” Reynolds told GOLF.com. “I grew up on a golf course and have been working in the industry for nearly 40 years, and I’ve never seen that before.”

As Reynolds explained peeling back the turf on just any tee box wouldn’t necessarily reveal the same sight. On the 3rd hole at Charter Oaks, the conditions were just right. For starters, Reynolds noted, par-3s tend to produce more broken tees than par-4s and par-5s. What’s more, he said, recent volatile temperatures in Massachusetts, which saw temperatures freeze then warm and then freeze again, caused the ground to expand and contract, pushing the broken tees toward the surface.

How many broken tees?

Reynolds estimates there are 8 to 10 of them per square foot on a tee box that currently measures 526 square feet (it will be nearly four times that square footage when the renovation is complete). Back-of-the-scorecard math tells us that that’s upward of 5,260 broken tees — a small fraction of the billions of pegs used in this country every year, but still, a lot.

According to Reynolds, the tee shards have no apparent ill effect on turf health. But they’re not entirely benign. Reynolds says they help explain why his mower sometimes goes out of alignment when it passes from the 3rd to the 4th tee, and why little dings appear now and then on the mower blades themselves.

At Charter Oak, wooden tees are complimentary in the pro shop, and Reynolds says that the vast majority of broken tees in the photo are wooden, not plastic.

“A lot of times it might not seem like it matters whether you’re using a compostable tee because you’re just picking it up anyway,” Reynolds said. “But you forget about the broken part underground.”

Not that he posted the photo as an environmental message. He just found the image interesting; nearly 900 “likes” suggests that others agree.

It makes you wonder what other surprises might be lurking under our courses.

“Sometimes, when you dig up a drain line, you come across big tangled balls of tree roots, and it can be pretty amazing to see how far those roots will go in search of water,” Reynolds said. “But I can’t think of anything that surprised me like this.”

3 smart bets for the Hero World Challenge, according to a professional gambler