Masters sleeper picks to watch: Here’s who might break out at Augusta National 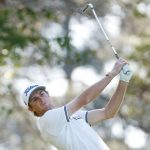 Will Zalatoris hits his tee shot on the 4th hole during his Monday practice round at Augusta National.

He could win the Masters! And he could! Him, too! Jordan Spieth was like the Oprah Winfrey meme, except instead of cars, it was green jackets.

“I wouldn’t be surprised going forward if you end up getting a first-time winner at some point or a number of young guys that are able to do it,” Spieth said last week. “Honestly, it’s a tough walk. It’s one of the toughest walks on Tour, so as much as that course takes out of you mentally, just being there, being the Masters, physically it can be a toll, too.

“So you would think that guys that are kind of in their mid-20s would be in the best position physically, but I mean, guys now are taking care of themselves to where, I mean, look at — not to call Lee Westwood not in his mid-20s, but he’s not in his mid-20s and he’s able to compete week in and week out on very difficult tracks. So golf’s in a cool place right now. I think for a tournament like the Masters someone could be 21, 22 and win and somebody could be 45 and win, and everywhere in between.”

You could win, too.

If this week’s Masters truly is anybody’s golf tournament, then a sleeper could rise to the top at Augusta National — and turn you a pretty profit. The trick, of course, is who.

We hope to help. Members of our staff have each made a sleeper bet using odds from DraftKings to assist you with your own weekly picks, whether those are for a low-stakes office fantasy league, (legal!) big-bucks bets with a sportsbook or through free-to-play Chirp Golf, an app from our parent company that is available in the App Store and at Google Play.

Sleeper pick: Abraham Ancer, +8,000. Ancer might be a trendy sleeper pick, so who knows if that disqualifies him as a sleeper. Either way, keep an eye on him. Last year, in his first Masters, he was T2 after 54 holes but stumbled with a final-round 76 to finish T13. Now he’s gained some key experience for Year 2. He’s also had nine top 25s in 14 events this year, so he’s in good form.

Sleeper pick: Matt Wolff, +10,000. Man … has it really been that long since Matt Wolff was in the final group at Winged Foot? Ah, yes, it has. Wolff is still young, and if he’s fully healthy this week, he could get hot at the right time.

Sleeper pick: Will Zalatoris, +8,000. He’s one of the best ballstrikers in all of golf, and I expect iron play to be at a premium this week. Plus he’s a big hitter, which Augusta National rewards. If he can get hot with the putter, look out! Most importantly, I ran into him at the grocery store, which is a key qualification for my model. (Bonus super-sleeper: Mackenzie Hughes, +40,000. We’re running out of words so just trust me on this one.)

Sleeper pick: Abraham Ancer, +8,000. Loved his inspired debut at Augusta in November when he finished T13, and he’s been playing well since, with seven T23 finishes in his past nine events. He seems ripe for a breakthrough.

Sleeper pick: Will Zalatoris, +8,000. Has there been any player who has experienced as meteoric a rise as Zalatoris over the past 18 months? He’s already one of the best ballstrikers on Tour, and once he figures out the putting, watch out.

Sleeper pick: Brian Harman, +12,500. Do I expect him to win? Not really. But at those odds, it’s worth a flier, considering he tied for third at the Players and made a nice run at the Match Play. (And if you’re really feeling frisky — Phil’s at +17,500!)

Sleeper pick: Francesco Molinari, +17,500. IF Spieth is unable to win the Masters as my pick, I’d love to see a comeback of another kind. Francisco Molinari has never been the same since his Masters meltdown. At +17,500, that’s a miracle I want to cheer for.

Sleeper pick: Sebastian Munoz, +15,000. A T19 in his first Masters last year showed that he’s a quick study. He also showed good form this past week in Texas. At 150-1, he’s more than worth the play.

Sleeper pick: Ian Poulter, +15,000. Like my pick to win, Collin Morikawa, Poulter controls his golf ball well. And not only does he hit it on a string, but he’s the grittiest of gritty competitors. Even though he has low odds to win the event, I wouldn’t be shocked to see his name on the leaderboard come Sunday. If he can roll in a few putts at the right time – and we know he can – Poulter could slip on the Green Jacket this week.

Sleeper pick: Marc Leishman, +15,000. Taking a flier on Leishman, who has finished inside the top 15 in his past three Masters starts. Recent form isn’t great — just one top-10 finish in seven starts this year — but he has the course knowledge.

Sleeper pick: Corey Conners, +8,000. Conners flirted with a win at the API, then made a late charge at the Players. He’s a solid ball-striker who has fared all right at Augusta in the past. How long can he hang around?

How to bet on the Masters — for free!