Are you a Masters expert? Test your knowledge with our ultimate Masters quiz 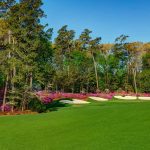 The stunning approach to No. 13 at Augusta National.

With a tournament history dating all the way back to 1934, the Masters provides endless trivia fodder for ardent golf fans. So, how much do you know about Augusta National and its premier invitational? Test your knowledge below to find out!