Masters picks to win: Here’s who our staff is betting on at Augusta National 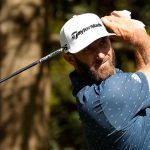 Dustin Johnson hits his tee shot on the 7th hole during his Monday practice round at Augusta National.

The 28-year-old third-year pro tied for 19th last November at his first Masters. He shot respectable rounds of 70, 68, 69 and 75. Then his playing partner his last day leaned in.

“I pretty much told him anything you learn today, this week, forget about it because it will never play like this again, period,” Jon Rahm said. “I mean, I hit some shots into some greens — I hit a 4-iron on Sunday on 15 and it was low and drawing into the wind to this back middle pin to land it an inch short and ended up three feet past that in years’ past that ball would have nearly been in the water on 16.

“So it just, it didn’t play the same. It wasn’t the same. You had to be very precise with the shots into the green. It was much easier off the tee because the ball was just plugging in the fairway. Chipping around the greens and putting, it was just slower, a little softer. It wasn’t the same, not even close to being the same. Still played somewhat like it because it’s Augusta National, and experience is always going to help with certain areas you can or can’t be, but very few years when we play in April where it plays close to those conditions. The last few certainly were very different to that, at least in my mind.”

While Munoz might not be able to glean much, you can.

There was a Masters at Augusta National last November. And, to veterans like Rahm, there wasn’t. Or at least not at the slick-greens-and-fairways Augusta we’re used to seeing every April. So as you, the bettor, look at last year’s Masters for clues on this week’s, maybe listen to Rahm: Forget about it.

Considering that, along with various other factors, let’s try to find a winner. Members of our staff have each made a to-win bet using odds from DraftKings to help you with your own weekly picks, whether those are for a low-stakes office fantasy league, (legal!) big-bucks bets with a sportsbook or through free-to-play Chirp Golf, an app from our parent company that is available in the App Store and at Google Play.

To-win: Bryson DeChambeau, +1,150. The BDC hype machine at the November Masters was too much for any player to handle, even golf’s Hercules. With some of that spotlight dimmed, I think DeChambeau comes into this week in a much better headspace. The firm and fast conditions also bode well for Bryson. When Augusta’s greens are breathing fire, hitting wedges and 9-irons into them — when your competitors are hitting 7- and 6-irons — is a massive edge. Bubba Watson told me that he played a practice round with Bryson on Sunday. On 14, they both tagged their tee shots. Bubba isn’t short, but he found himself 70 yards behind his playing partner.

To-win: Patrick Cantlay, +2,050. Jordan Spieth’s recent surge is intriguing, and I expect him to be in contention, but I’m sticking with my pick I nailed down a couple of months ago. Cantlay has played well in his previous trips to Augusta National (T17 and T9 past two starts) and has a game well-suited for succeeding there — solid ball-striker and a good putter with superb touch around the greens. He missed the cut at the Players, but other than that, he’s finished no worse than T15 in his four other stroke-play events of 2020.

To-win: Justin Thomas, +1250: In what world are we living that Jordan Spieth has once again usurped Justin Thomas as a Masters betting favorite? Apparently, the present one. Not long ago, there was some question whether JT would be the overall Masters favorite after winning at the Players Championship. If his approach game is as dialed as it was at Sawgrass, he’s going to be in the thick of it on the weekend.

To-win: Xander Schauffele, +2,600. He’s been among the best players in the game this PGA Tour season. If Augusta plays firmer and faster, he’ll be well-suited to handle tougher conditions. And his game is just so bulletproof that I expect he’ll be there at the end. A big win is coming. And at this price, he’s a bargain.

To-win: Dustin Johnson, +950. Yeah, he’s the favorite — but for good reason! Not only is DJ the world No. 1, but his record at Augusta is top-notch: He’s finished in the top 10 in all five of his most-recent starts at the Masters. There’s no reason to think this year will be any different.

To-win: Scottie Scheffler, +5,500. The guy just oozes with talent. He’s been close several times in his young career (PGA, Match Play), and eventually he’ll break through. Why not this week?

To-win: Sungjae Im, +4,150. I know, I know. I just wrote an entire story above detailing that last year’s results don’t mean much this year. But I’m looking at more than Im’s runner-up finish last year (though I’m not completely ignoring it, either). It takes iron excellence to win at Augusta, and Im has it. And those odds are so very lovely. (Put me down for thinking that Patrick Reed may make a run, too.)

To-win: Jordan Spieth, +1,150. Call me a sucker for getting caught up in the moment all you want. Spieth’s back. Like, really back. That gets solidified with another Green Jacket. It won’t happen easily (nothing ever does for Spieth), but it will happen.

To-win: Bryson DeChambeau, +1,150. After all the breathless talk of Bryson headed into last fall’s Masters, there’s been (comparatively) little buzz around him this time around — understandably so, what with Spieth ascendant and DJ defending and Rahm chasing his first major. All of that will benefit DeChambeau, who is guaranteed not to make a lost-ball triple bogey on 3. Beware of the man walking softly and carrying a big stick.

To-win: Collin Morikawa, +3,150. Rumor has it that Augusta is already playing quite firm, which could mean golfers who control the ball well will prevail. And no one controls their golf ball better than Collin Morikawa. Although he primarily plays a fade, and Augusta is typically seen as a drawer’s course (for a righty), I think Morikawa’s control off the tee and deadly iron play will keep him from making costly mistakes that will plague others. He’s already got the major monkey off his back, so he’ll be coming into this week with confidence. +3150 feels like great value for Morikawa, too, which is always nice.

To-win: Scottie Scheffler, +5,500: I’m taking a Longhorn this week — only it’s not the one you were expecting. Spieth was my pick for months until he became the popular betting choice. So instead of sticking with my gut, I’m shaking things up and going with Scheffler. He finished runner-up to Billy Horschel at the WGC-Dell Match Play and has three top-20 finishes in his past five stroke-play starts. Oh yeah, he was also T-19 last season in his first Masters. I love this pick.

To-win: Jon Rahm, +1,250. The man has only improved in each trip he’s taken to Augusta National. Three top 10s in the past three years. The new-father storyline is already playing on a loop in Jim Nantz’s ears.

How to bet on the Masters — for free!