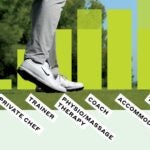 How much do the top pros spend a year? It adds up.

“You’ve got to spend money to make money.” Golf’s top pros live by that maxim. Sure, they rake in the cash — just like you would if you could fly it 320 and hole left-to-right knee-knockers with everything on the line. But they also have to part with major coin to keep up with the Bobby Joneses.

GOLF asked an industry veteran with intimate knowledge of a top-30-ranked Tour player’s finances to give us an inside look at the debit side of the ledger. It’s clear that the outward half of the money game is steep enough to put serious stress on the inward half. Add up all the expenditures and the cost of doing business for a superstar player ranges well into seven figures, approaching $2 million per year.

Better not start missing too many cuts. Here’s the breakdown.

Who says the game’s cash-machine stars aren’t still hungry? Few elite players have full-time private chefs — but they often hire them, and those services go for $3,000 to $5,000 a week. Mmmm-mmmm, expensive.

There are all kinds of coaches: swing, short game, mental, even data. Contract structures likewise vary, from flat rates to commissions, but this is the (tony) neighborhood for the annual cost of coaching.

Ballpark, because the price of rental homes and hotel suites vary wildly from one Tour stop to another. Still, in lodging, as with airfare, these guys don’t often stint, which makes for a hefty year-end line item.

Most loopers for top players earn a base fee of $2,500 a week, plus 10 percent of prize money on a win, 8 percent on a top-10 finish and 6 percent on everything else. Do the math — don’t forget to factor in the wind! — and you get a substantial sum.