In this golf gambling game, your weakest link will make or break you 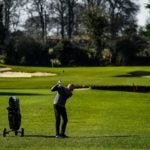 In a Miami Scramble, a team is rewarded for the performance of its weakest players.

Which spots are on your list of must-see golf destinations? St. Andrews is an easy one, same with Pebble Beach, Pinehurst, Bandon and Cabot. What about Florida? South Beach, anyone?

Sure, Miami doesn’t have the same cache as some of the aforementioned spots. But the namesake behind this week’s golf gambling game, the Miami Scramble, deserves at least a tip of the cap for birthing a unique twist on a timeless golf format. Here’s how you and your buddies can play.

The traditional scramble is a format used by golfers around the world, often in the case of large outings and events. In a scramble, all four golfers play the best ball of their foursome on each successive shot until the ball is in the hole.

As a result of each golfer playing the foursome’s best shot, a scramble generally sees improved scoring and pace of play. However, the nature of the format also lends itself to getting dominated by groups featuring one highly-skilled golfer.

In a Miami Scramble, the rules of a traditional scramble are flipped on their head. As opposed to a single low-handicap golfer carrying his or her team, a Miami Scramble requires a team’s weakest players to perform well in order to be successful.

A Miami Scramble requires a combination of ability and strategy from all four players. Teams who use their best player’s tee shot are forced to rely on their other three golfers to carry the remainder of the hole, while those who opt to rely on a tee shot from their lesser players risk losing birdie opportunities off the tee box.

In either case, teams who wish to score well in a Miami Scramble are only as good as their weakest link. If you’re ready to raise the stakes (and the temperature) in your next round, it’s time to try the Miami Scramble.