Victimized by a botched fertilizer job? Here’s what went wrong (and how to fix it) 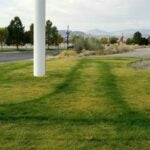 Does something like this look familiar to you? If so, we can help.

Here’s some fertile ground for discussion. The photograph, above, of a lawn-care mishap was snapped by David Phipps on a recent work trip to Nevada. Phipps is a course-management veteran who now serves as Northwest regional representative for the Golf Course Superintendents Association of America, so he gets around a lot and inspects a ton of turf. When he sees something amiss, he often takes a picture: part conversation piece, part cautionary tale. Based on its sad striping, there’s little doubt that the lawn depicted here was victimized by a botched fertilizer job. But what, exactly, went wrong? We asked Phipps to lay out the likely missteps along with tips for those of us trying to do things right at home.

The Problem: A Bad Spread

When we golfers see a fairway getting fertilized, the machine at work is usually what’s known as a broadcast spreader — a wheeled get-up with a bucket on top and a spinning wheel below. As fertilizer drops through a hole in the bottom of the bucket, the wheel disperses the fertilizer. The idea is to cover the turf evenly, which, Phipps says, pretty clearly didn’t happen here.

1. Ghost in the Machine?

It’s possible, Phipps says, that the machine itself was glitchy. Maybe, for instance, the wheel had a faulty rotor and wasn’t spinning fast enough. Or maybe some other mechanical flaw allowed an excessive amount of fertilizer to pour down all at once. “If it’s coming out too fast or the wheel isn’t spinning fast enough, all that fertilizer is just falling to the ground,” Phipps says. “You wind up with a heavier application in some places.” And stripes.

It’s more likely, though, Phipps says, that the machine was working fine, and that someone was using it improperly. Broadcast spreaders have different settings, and commercial fertilizers come with instructions. In this case, it’s possible that they didn’t match. The fix is simple. “Look at the bag of fertilizer, and it will often have a letter or a number,” Phipps says. “You want to find the corresponding letter or number on your spread that corresponds to the amount you want to put out.”

Let’s say you were operating a Zamboni. Would you ride it haphazardly around the ice? No, you wouldn’t. Spreading fertilizer is no different. You want to proceed in an orderly fashion. In this case, it looks like someone didn’t.

When fertilizing a lawn, Phipps recommends working the perimeter first “to get a nice clean edge.” To that end, spreaders have a drop-shield on one side, a guard rail, in essence, that you can raise and lower to prevent fertilizer from going where you don’t want it to go (you especially don’t want it to go onto the sidewalk or other hard surfaces that will provide a pathway for the fertilizer to get into the public waterways). Once you’ve done the perimeter, work back and forth across the rest of the lawn, covering it with what is known as a “double overlap.” To picture this, imagine that you’re working in early in the morning on a dew-covered lawn, so that you can see your wheel marks. With each new pass, Phipps says, you want the outside edge of your spray pattern to meet the wheel marks from your previous pass, giving you double coverage on one side. That will leave the other side covered only once, but you’ll take care of that on your next pass.

From the photograph above, it’s clear that the coverage was uneven. While some parts of the lawn got plenty to eat (the dark green stripes represent turf that was heavily fertilized), other parts (the pale stripes) were starved. It could have been worse, though, Phipps notes. Applied in excess, fertilizer can scorch turf and kill it, which didn’t happen in this case. That’s the good news. The bad news is, not much else went right.