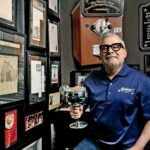 Our plan was to rent a convertible and purchase an oversize foam-rubber cowboy hat for Bates to wear. As we passed other vehicles on the road, Bates would lean out the passenger window and scream, “Yeeee-ha!” while waving the faux Stetson about in the manner of Slim Pickens riding the bomb in Dr. Strangelove. It was — and I do not say this lightly — the greatest plan ever. We assumed every store in Texas would sell comically large headwear and were dismayed to learn otherwise.

Another thing we learned was that Byron Nelson, whom I was in Dallas to interview, sure was touchy about a total stranger wandering around his home and picking up his major championship hardware. To be fair, at the time Bates didn’t know Byron Nelson from Ozzie Nelson. He (Bates, not Ozzie Nelson) was ambling in the background while a film crew set up lights, did sound checks and dabbed makeup on Lord Byron’s quite old visage. He (Byron Nelson, not Bates) was 78 when this took place, so you can imagine the consternation on his face when he peered over the powder puff and saw Bates holding some shiny Masters or U.S. Open knickknack.

“What are you doing?” said Nelson. “Put that down.”

Bates nodded and smiled, and I’m pretty sure at that moment we both thought, Damn, I hope we can find a big foam hat store when this interview is over.

We never did, but later that week we were in Austin visiting a buddy who was a UT law student, and while drinking Lone Stars in someone’s backyard, several fire ants ascended the south face of Mt. Bates. One (fire ant, not Lone Star) bit him somewhere you really would rather not be bitten by a fire ant. The incident temporarily amused us, but the genuine anguish of not finding an enormous foam hat lingered. That deep emotional pain could have been gently swept away by an icy tide of tequila had we known something it saddens me to reveal I only recently learned — not even 20 years before, the frozen margarita machine had been invented in Dallas. In other words, I could have been interviewing Mariano Martinez who, to borrow a phrase from Forrest Gump, should be famouser than even Captain Kangaroo.

As a boy, Martinez bused tables at El Charo, his father’s restaurant in East Dallas, and he would eventually open his own restaurant. But before that happened there was music and golf to be played.

In the 1960s, Martinez played bass guitar in the house band at Louann’s, the spot in Dallas, and jammed alongside Chuck Berry, Ben E. King, the Drifters, Fats Domino, B.B. King, Jimmy Reed — you get the idea. Directly across the street from Louann’s was Hardy’s Driving Range. If you know your golf history, you know Hardy’s was the place where Lee Trevino worked when he hustled locals before he started whooping PGA Tour players. Before his evenings of guitar picking, Martinez would relax by hitting some balls at Hardy’s. He met Trevino in those days — the musician an admirer of Trevino’s remarkable ball striking, and the golf-legend-in-the-making an admirer of Martinez’s car.

“I drove a red Triumph,” says Martinez. “I was about five-three and weighed about 120 pounds. Years later, someone thought they were introducing me to Lee and he said, ‘Do I know Mariano? Let me tell you, this little red car used to pull up to the driving range at night. You couldn’t even see the driver — it looked like the car drove itself. Then this little Mexican would get out of the car looking all of 12 years old.’ ”

Martinez now splits time between his hometown and Pebble Beach. The foundation of his success, and the driving force behind the popularity of Tex-Mex cuisine and tequila in the U.S., was undoubtedly Martinez’s creation of consistently perfect frozen margaritas.

When Martinez’s original restaurant opened, the joint was packed, but bartenders couldn’t keep up with demand for frozen margaritas, which had to be made using a lone blender. Martinez solved that problem one morning while buying a cup of coffee (see photo at bottom of article).

If you’re looking to make some Mariano margarita magic at home, Martinez says the starting point is 100 percent agave tequila. He suggests either Herradura Silver or Don Julio Blanco. For a nonfrozen margarita, fill a pint shaker with crushed ice, add 2 oz tequila (“a potent but polite portion,” says Martinez), 1 oz Cointreau, 2 oz fresh-squeezed lime juice, a splash of simple syrup. Give five sturdy shakes before pouring. Salt on the glass rim is optional (and salt with tequila in general is a holdover from the days of masking inferior tequila). To make a frozen version, measure all the ingredients as described and turn it into a wintry mix with 12 oz of ice in a blender. Garnish both versions with a slice of lime.

With success, Martinez came to know a good many Tour players and celebs from frequent participation in pro-ams and countless rounds at famous man cave Preston Trail.

To sum up, here’s a quick one on why I would have rather interviewed Martinez all those years ago. One day Mariano was on the 17th hole at Pebble Beach when his cellphone rang. “I’m with Fred Couples,” said Lanny Wadkins into the ear of the man who made frozen margaritas a part of global culture. “They’re telling us it’s a two-hour wait to get into La Hacienda Ranch in Frisco.”

Inspired by a Slurpee machine, Martinez realized if his margaritas could be premade, all his bartenders would need to do was open the spigot. The honchos at 7-Eleven refused to sell him one. In the aha moment that launched a trillion brain freezes, Martinez bought and adapted a soft-serve ice cream machine to fulfill his vision — and massive success followed. (Adding simple syrup to the margarita recipe was key to creating the slush.) That machine is now in the Smithsonian National Museum of American History.