11 ways you ruin your golf round before it even starts 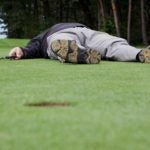 Your terrible round took a bad turn before you even hit your opening tee shot.

It’s a tough realization. You just three-putted the 18th to close your round, and your scorecard suggests maybe you should have just stayed home and mowed the lawn.

And while you spend most of the 19th hole explaining to your buddies where and how your round went so terribly wrong, the truth is it didn’t happen with your three OB drives, two shanks or dreaded four-putt. Your round likely went south before you even teed off on the opening hole.

Here are 11 ways you can ruin your round before it even starts. Avoid these and maybe you’ll start finding more circles on your scorecard.

You show up too late

This is the biggest no-no. When you are late, everything is rushed — check in, driving range, putting practice (if you even have time for that). The round starts well before you hit your first tee shot. So don’t be late!

You didn’t get enough sleep

Late night working or watching Netflix? Arriving to the course groggy will make your game sluggish, too. Speaking of not getting enough sleep…

It happens to the best of ’em, but aching after a bachelor party or night out on the town isn’t going to improve your contact. It also might make the day pretty miserable overall.

You don’t warm up the right way

Think of your time at the course prior to your tee time as an extension of your round. You think Tiger and Brooks and Dustin and the fellas just show up and practice without a plan? Know how long you want to hit range balls for (and which clubs), and give yourself the time you need to stretch or putt or get your bag and gear ready. Give yourself minimums for each so you can check them all off, but leave some extra time to play with in case something like, say, your putting stroke, needs a few extra reps.

You have too many swing thoughts

By all means, head to GOLF.com and steal a swing thought or work on that tip your local pro has helped you with, but don’t overthink it. Too many thoughts are not good for the average golfer. Keep it simple, focus on one key element and go from there.

You hit only drivers on the range

Wow, that’s awesome watching you scare the range netting with your 14th straight blast with the Big Dog, but you’re still only hitting that club maybe 15 times, max, when you get to the course. Mix in a couple of wedges, will ya? You might need them.

You never want to three-putt, and one of the best ways to avoid this is improve your lag putting. This doesn’t mean launching a dozen 90-footers aimlessly across the putting green, but you could benefit from rolling two or three 30-footers, just to get a nice feel for the speed of the greens. More often than not they’ll roll at a similar speed once you get on the course.

You don’t practice the important putts

Lag putting is key, but so is canning the putts that will make or break your round. Those putts are the ones right outside gimme range but inside about 8 feet. It’s the distance where you stand over a putt and aren’t intimidated by the look, and it’s close enough where if you miss you’d be annoyed. Putts from 4-8 feet are crucial, but not that easy to make. Ian Poulter leads the PGA Tour in conversation rate from 4-8 feet at 86 percent, but only 14 players on Tour make 3/4s of those putts. The worst player in that category, Paul Casey, makes 1/2 from the range. So focus on that tricky distance. Once you see one drop the hole will start to look bigger, and a strong putting day from that range — like making 7 of 12 instead of 2 of 12 — can shave five strokes in a heartbeat.

You didn’t eat or hydrate

Plan ahead! Grab a bottle of water. Eat at home, on the go or make sure you have enough time when you get to the course. But don’t jeopardize a promising round due to a lack of food fuel. (Here are some ideas for what to pack in your bag.)

You don’t know anything about the course

You may think you did everything right to get ready for a course you’ve never seen — hit balls, roll putts, etc. — but did you know the first four holes have tight fairways and doglegs and your best bet might be hitting a hybrid? Now you probably wish you would have striped that 17-degree more than twice on the range, huh?

You are too focused on other things

Stop worrying so much about your foursome’s betting game, what tees you are playing or that epic playlist you’ve been cooking up since the car ride over. Put the phone away and check out Twitter later or respond to that work email when you get home. None of it’s going anywhere. And plus, making sure your game is ready for a par-birdie-par start is way more important.