Who will be Tiger Woods’s next swing coach? We handicap the field of contenders

In a procedure that has become as familiar to him as back surgery, Tiger Woods has separated himself from yet another swing coach. Woods broke the news Friday on Twitter, announcing that he parted ways with Chris Como, his swing consultant of the past three years. In the short run, at least, Tiger will fly solo. But we’re betting that hey’ll tire of being his own swing doctor, so we have drawn up odds for who he’ll hire next.

At his golf academies, Leadbetter has helped countless struggling golfers swing more like Tour pros. Maybe he could get Tiger back to swinging a little more like … Tiger Woods.

Like his father, Butch, Claude is a pedigreed instructor. Unlike his father, he has no Tiger baggage. For Woods, it would be like “going back to Butch,” without feeling like he’s given in to what so many have urged him to do all along.

What’s wrong with Tiger’s short game? Is it just a case of rust? Or is he haunted by the heebie-jeebies? If he hired Pelz and his chipping woes continued, we would have the answer. It wouldn’t be for lack of practice or technique.

There is so much talk these days about whether an aging Tiger can keep up with the young bucks. He could start by hiring the guy who helped make Jordan Spieth the wunderkind he is.

Not only a close friend but a former college teammate, Begay is an insightful student of the swing who brings three of the qualities Tiger values most: loyalty, loyalty and loyalty. And since he’s already following the action as an on-course commentator, he could offer playing lessons as well.

Harmon has said that he would never work with Woods again, and besides, that Woods would never ask him. But in retrospect, the end of their wildly successful partnership has often seemed like a high school breakup: an immature decision that neither party could fully explain.

For a guy with a history of back trouble, maybe the best option is to sit at home relaxing with the television tuned to Breed’s instructional show, The Golf Fix.

Sure, Tiger knows a lot about the golf swing. But he’s never had the benefit of working with a two-time major winner who could tell him when he’d choked under pressure or caught a shot “just a groove high.”

Though theirs was not the most amicable of breakups, it’s hard to ignore the happy times they had. Just think what could happen if they got back together: Woods could win another six majors, and Haney could write another best-selling book. 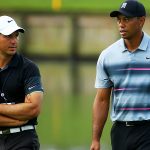 When it comes to the golf swing, few people are wonkier than Tiger, who is famously fond of diving deep into the weeds. One of those people is O’Grady, the eccentric, ambidextrous golf savant who reportedly once tried helping Seve Ballesteros by burying Seve’s swing flaws in a box in a desert. Wait. That’s not wonky. That’s just weird. Chamblee has made a side career of scrutinizing Tiger, so it wouldn’t be a huge leap to turn that gig into a full-time job. Question is: how would Woods respond if his coach told him he was getting “a little cavalier” with his swing?

But wouldn’t it be fun to sit around speculating which of the two would get fired first?