WATCH: Arnie’s final interview at the Masters will give you chills

Despite his absence, Arnold Palmer’s presence has been felt every day of the 2017 Masters, from the ceremonial tee shot to the final round. And now, the official website of the tournament has released a never-before-seen interview with Palmer, an interview that turned out to be his last.

CBS’s Jim Nantz chatted with Palmer following the 2016 Masters ceremonial tee shot, covering everything from his favorite moments at the Masters, to playing with former President Dwight Eisenhower, his relationship with Jack Nicklaus, and how he silenced his critics at Augusta National.

“They said I would never play it very well because I didn’t hit the ball at the height that you had to play around here to play good,” Palmer said. “So I took that seriously and I spent a lot of time working on my game to kind of overcome the criticism that I was receiving for the way I hit the golf ball.”

Palmer would go on to win four green jackets and become one of the honorary starters in 2007. In 2016, Palmer’s poor health prohibited him from hitting the first shot: he still attended, taking pictures with fellow starters Nicklaus and Gary Player. Had he lived to witness this year’s tournament, it would have had Arnie’s curiously unique swing kick things off for a straight decade. 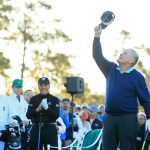 You may also like Fit for a King: Arnold Palmer honored in moving tribute at Augusta National

When asked about what it was like to observe instead of participate, Palmer told Nantz: “It brings tears to your eyes, makes you want to be a part of it and to stay a part of it the rest of your life.”

“Well you do realize, you will always be part of Augusta,” Nantz said.

And he was. You can watch the full interview here.