President Donald Trump is on an extended trip to Asia this week, and much like when he is in the U.S., the subject of golf keeps coming up.

Trump’s first stop was Japan where he played golf with Prime Minister Shinzo Abe and PGA Tour star Hideki Matsuyama. Then the president flew to golf-crazy South Korea, and once again he talked about the game, but this time in front of a gathering of Korea’s politicians. 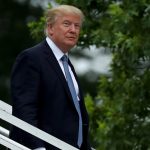 You may also like North Korea to Donald Trump: Stop playing so much golf

David Nakamura of the Washington Post reports that during his speech to South Korea’s parliament in the capitol of Seoul, Trump began praising the country’s female golfers who have dominated the LPGA tour for years… but not without also promoting himself and one of his golf clubs.

“Korean golfers are some of the best on Earth. And you know what I’m going to say — the women’s U.S. Open was held this year at Trump National Golf Club in Bedminster, New Jersey. And eight of the top 10 players were from Korea. And the top four golfers—one, two, three, four—the top four were from Korea. Congratulations.” The 2017 U.S. Women’s Open, which was won by South Korean Sung Hyun Park, was indeed held at Trump Bedminster in July, and the president made a much-talked about appearance at the event. It was the first men or women’s major hosted at a Trump course. 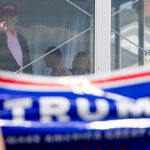 You may also like Trump made his presence felt at the U.S. Women’s Open but a young Korean stole the show

Nakamura notes in his report that the remarks were well received by the Korean audience, even saying they reacted with “enthusiasm.”