Trump made his presence felt at the U.S. Women’s Open but a young Korean stole the show

BEDMINSTER, N.J. — H.J. Choi—17-year-old amateur golfer from Korea, braces on her teeth—was trying to win the U.S. Women’s Open. She had hit it close on the par-4 15th hole and had about 10 or 12 feet for a birdie. A three that would give her a tie for the lead late on Sunday.

A certain spectator—Donald J. Trump, in a pink shirt and a blue blazer with a double-vented back—appeared at the western wall of the White Cube, a fortified tent on a platform, lodged between the clubhouse and the 15th green. He wanted to take a closer look. He developed the property, Trump National Golf Club, the players were playing. It was a development headed for bankruptcy until he stepped in. It’s a magnificent and plush course, with a gilded clubhouse. He regards the whole set-up as one of his crowning achievements. 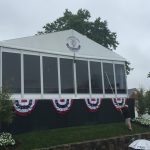 You may also like President Trump’s arrival spices up dreary afternoon at the U.S. Women’s Open

Back in the day, before Jan. 20, Trump roamed the course and clubhouse as he pleased. He was king. But now he is president, and he spent Sunday afternoon as he spent Saturday afternoon, in this temporary glass-walled fortress, with a large flat-screen TV as its major focus, flanked by two American flags. He watched Choi make the putt. The young golfer and her Chinese playing partner, Shanshan Feng, made their way to the 16th tee, a par-3 over a pond.

The America-First president could not have been thrilled by the leaderboard on 15. There wasn’t an American on it. But his course looked beautiful, as did his wife (in a summery white dress)and after about a decade of heavy wooing he had the most important event in women’s golf at the place he considers his true home, more than his massive apartment complex in Manhattan, more than the private club/mansion he owns in Palm Beach (Mar-a-Lago), more than any of his other properties. A 17-year-old amateur winner would be a hell of story. It would be something he could use in conversation, in his particular way, with the new president of Korea, Moon Jae-in.

Choi moved to the 16th tee and Trump moved to the White Cube’s southern wall. He was watching closely when she did what he has done there, hit a push-shove from 145 yards into the pond. Her double-bogey there took the wind out of the event and paved the way for Sung Hyun Park, playing a group ahead of Choi, to close out an airtight 67, on top of a Saturday 67, and win by two shots over her fellow Korean.

Trump took off as the event was wrapping up and didn’t stay for the award ceremony, which was, in its own odd way, loaded with charm. It was a mellow affair on a still night, and to be generous there might have been 2,000 people on hand for it. Two medals were draped around Choi’s neck, a silver one for being the runner-up and a gold one for being the low amateur. Later in the evening, when she was waiting on a ride to take her off campus, a passerby asked her which of the two meant more to her. A friend translated the question and Choi smiled widely and said in Korean, “This one!” She lifted the larger gold medal off her chest. “They don’t give out this one every year.” No, they don’t. There’s always a runner-up. There’s not always a low amateur.

Then came Park. She’s 23 with long, slender limbs, accentuated by snug black pants and a snug white shirt. She stood between a translator and Mike Trostel of the USGA, who was conducting a public interview with the winner, holding the large silver trophy in front of her. Park stared straight ahead as she answered the questions, speaking in an almost flat voice. Golfers from Korea are a dominating force in women’s professional golf but there’s a cultural gap between how they go about their business and how the American players go about theirs. There is often a domineering father just outside the frame of the picture, tugging on a cigarette, communicating in a language, spoken and unspoken, that doesn’t lend itself to easy translation. 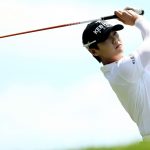 You may also like Rookie Sung Hyun Park triumphs at U.S. Women’s Open in front of President Trump

But there was a moment at the conclusion of the interview that charmed roughly 2,000 people, a moment that needed no translation. Park warned that English was coming and then she said (flawlessly), “Thank you, USGA. And especially to my fans, thank you.” Mike Davis of the USGA smiled broadly. Eric Trump, the second son, smiled broadly. H.J. Choi smiled broadly.

As he was leaving the 18th green, Eric Trump spoke for a couple of minutes about what the event meant to his father. “He was so relaxed, he was having so much fun,” said Eric, who runs the Trump Organization’s golf properties. “It was nice for him to be outside of Washington, D.C.”

Eric spoke about the Trump courses in Scotland, including a second course at Turnberry that was renovated and recently reopened and given a new name. What was the Kintyre course is now the King Robert the Bruce course. He talked about the PGA Championship coming to Trump Bedminster in 2022. 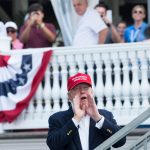 You may also like Protesters, Trump supporters face off near U.S. Women’s Open

Eric was asked if his father was getting any cabin fever in his White Cube. Not a chance, the son said.

Eric seemed happy. His father, through the Plexiglas, seemed happy. Mike Davis seemed happy. Sung Hyun Park seemed happy. HJ Choi was definitely happy. It started as a golf tournament. For a while, it turned into something else. In the end, it was a golf tournament. A mellow event on a handsome course with a eight of the top-10 finishers from a country (Korea) where the young women golfers know what it takes to get good fast at a difficult game. Park won $900,000. Choi took home a medal. Her day is coming. The 72nd U.S. Women’s Open is over. The Trumps get their course back.