Toledo was born in poverty, now he’s playing a Trump course for himself and others 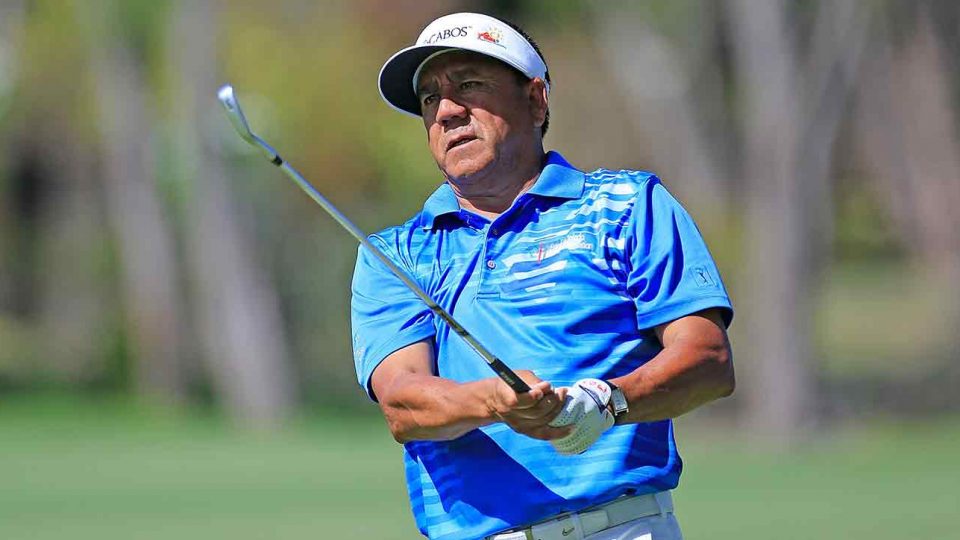 STERLING, Va. – The boxer-turned-golfer came up 18. Black shoes, blue pants, orange shirt, white visor, brown skin. The sky was high and gray, spitting afternoon rain. A hundred people, if that, sat in a greenside bleacher. An announcer, without microphone or fanfare, welcomed the long-retired lightweight and his two playing partners—Peter Fowler of Australia and John Daly of wherever his RV happens to be parked—to the 18th green. This was on Saturday, during the third round of the Senior PGA Championship, at Trump National Washington D.C. The course owner’s surname was stenciled on Daly’s sleeve: TRUMP.

“Please welcome, from Mexico, Esteban Toledo.” TOE-lay-DOUGH, pronounced perfectly. A smattering of applause. Toledo, 54, has won four times on the senior tour. But this week, after nothing-to-write-home-about rounds of 70, 73 and 73, Toledo is playing for his bank account, for the orphanage in Mexico that bears his name, for his people.

Donald Trump wants to build a wall between Mexico and the United States. The whole world knows that. Toledo is fine with it.

“This is your territory,” Toledo said on Saturday, standing near a clubhouse the size of the White House. His day had begun at 4:45 in the morning, to finish his second round. Somehow, he looked—not fresh, but not wiped out, either. He’s a fit hombre. “A wall is a boundary. Just like the wall of your house.”

Toledo became a U.S. citizen about a decade ago. “You have to take a test, and I got 100% on it,” he said. “I can tell you the names to the rivers, the battles, the presidents.” His formal education ended at 16, and he spent most of his teenage years picking cotton. All golf was to him then was a way to make money as a caddie. And since then his feelings about the game have barely changed. “I like golf,” he said. “I love boxing.” 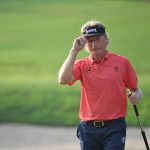 You may also like Vijay Singh, Bernhard Langer set for Sunday showdown at Senior PGA Championship

Toledo has let all that go. “I don’t know if I like the guy, but he’s fighting for you guys,” he said. “I’ve never met him. I’d like to meet him. I’d like to meet Obama. I’m not a Republican or a Democrat. But you have to respect the president. Americans, they are the luckiest people in the world, and when they don’t respect the president, it makes me sick.”

He owns four houses in the States, and proudly shows a photo of his beautiful stucco home in a gated community in Irvine, Calif. He lives with his wife and two children in the Woodlands, outside Houston.

You don’t have to worry about him hiring illegal immigrants. “We don’t have a housekeeper, we don’t have a gardener,” he said. He shows another photo on his phone, of him pushing a lawnmower. No cook, either. “Five days out of seven, when I’m home, I make hot breakfast for my wife. Eggs, bacon, potatoes—a Mexican breakfast. Colleen makes dinner.” As for lunch, you’re on your own. His English, by the way, is excellent.

The picture Toledo shows with the most pride is of a 5,500-square foot cinderblock orphanage he has built, through the Esteban Toledo Family Foundation. By August, Toledo said, 30 children without a mother or a father will move into the building and have a place to call home until they turn 18. Toledo is the youngest of 11 siblings raised by a single mother, and he says he feels the pain and the loneliness orphans feel. There was a black ribbon on his visor, a sad nod to the 22 people, many of them children, who died in a bombing at a May 22 concert in Manchester, England.

Toledo is liked by his fellow pros, who kid him about his immigrant status. (A typical comment: “Your favorite direction has got to be north, ‘cause that’s what got you here.”) Toledo and Daly chatted their way around the course on Saturday, talking about nothing and everything. “He’s humble,” Toledo said of Daly. “He signs autographs for everybody. He has the Trump name on his sleeve, but I don’t know what he’s sponsoring. John is not a politician.”

Toledo can tell you, chapter and verse, about his first legal trips to the United States as a young boxer, the six-month visas, the return trips to Mexico, the visa extensions. But he also acknowledges, without providing much detail, the undocumented border crossings he made as a teenager. He knows first-hand how dangerous those journeys can be. He also knows about the powerful draw of the U.S. economy. He talked about a $5,000 payday he once earned as teenage boxer. His mother never made that in a year. But he is a firm believer that Mexicans who are in the United States should be here legally or not at all.

Toledo’s American life—and golfing life–was sponsored by Jon Minnis, a wealthy Californian he met along the way. “When he was dying [in 2003], Jon said to me, `Teach your people to fly.’ Jon taught me to fly, and that’s what I am trying to do with my foundation. Teach people to fly.”

Somewhere on the Trump National property was a helicopter bearing the Trump name. Air Force 1 had recently returned from Europe, flying President Trump back to the United States. Behind Toledo, on the course, golf balls were airborne bound for distant pins through the spitting rain. But Toledo’s benefactor wasn’t talking about literal flying, of course, and neither was Toledo. They meant flying this way: taking a child by the hand, giving him or her a hot breakfast and pointing the way to a first tee, to a starting line, to a trainer’s room, to a library. To a future.