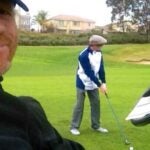 We all play golf for different reasons, whether it’s to enjoy time being active outdoors, to give our weary minds a break from the daily grind, or simply as a means of engaging in some friendly competition.

People who love the game agree it’s a sport like no other, and if you ask two-time Oscar winner Ron Howard, he’ll tell you that much of golf’s beauty lays not in how well you play, but what the sport gives back to you.

On this week’s episode of Off Course with Claude Harmon, Howard described the many ways he felt golf benefitted his son, Reed, during Reed’s adolescence.

“There is something about a young person recognizing what it takes to excel, what it takes to be a cut above the rest of the game, that is incredibly useful,” Howard said. “And while [Reed] continues to pursue avenues of the golf industry, including playing, and is still very competitive, he’s also a businessman, and I see it. And he’s winning. He knows how to win. He understands the fundamentals.”

Howard, whose new book, The Boys: A Memoir of Hollywood and Family, chronicles his early life and career (you can buy a copy here), says that while he played other sports as a kid, he fell into golf as a high-schooler, and was just good enough to enjoy the game without lessons.

“What I saw with Reed and golf,” Howard said, “As he shifted from hockey and baseball and all that stuff at around age 11, 12, 13 into real full-focus on golf — spurred largely by his love of the movie Happy Gilmore — the etiquette of the game, and the expectation of even a young player if you’re out there in a foursome with some other people who are trying to get a good round in, and as soon as you get good enough, that you’re not just the cute little guy playing along, you’re actually a part of a foursome, with a rhythm and a flow, and the rules matter. That etiquette is spectacular.

“And then you add on top of that, it’s pretty easy early on to differentiate who’s doing better and getting better and why,” Howard continued. “And it pretty much all boils down to work. And who to listen to, who to get the good guidance from.”

Howard had a similar experience as an actor, and was even told that he would likely be a director when he grew up.

“I was around an etiquette, a sensibility, a process, that I witnessed and learned to appreciate and enjoy. And in his own way, I felt that about Reed and golf, and his relationship with the game and those who play it. And it’s been very constructive for him as it has for me.”

For more from Howard, including what he loves most about golf and why great golf movies are so hard to make, check out the full interview below.