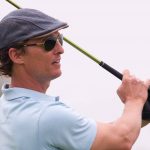 Matthew McConaughey used to be a 4-handicap. Now? He's more like a 24.

The Oscar winner and best-selling author used to play to a four. Now it’s more like a 24, but that’s “Alright, alright, alright!”

Your father got drafted by the Green Bay Packers. Was he disappointed that you chose golf as your sport and not football?

Football was king in Texas. I decided I didn’t want to play and thought, How am I gonna tell Dad? One night he came to my room and I said, “Pop, I think I wanna play golf.” He said, “Great idea, son.” I went, “What?” And he goes, “Let me ask you a question. Can you tell it’s me coming to your room before I get there?” I said, “Yes sir, I can.” He goes, “You can hear me because I got a five-inch plate in my back, four screws in this ankle and two in this knee. Buddy, play golf. You can play it till you go down.”

What’s the most memorable round you’ve played?

It was at Lochinvar in Houston. It was a July summer day and me and my brother went out. We walked it. I like walking. I think it sets the pace that golf is meant to be played. Anyway, I had one of those days where I was just Harvey Penick-ing it. Not trying to draw it, not trying to fade it. I was hitting straight at the pin. I shot myself a little 77.

You do a lot of commercials for Lincoln. What would it take to get them to make you a custom golf cart?

I like the cold, cold beer. Two cold beers, actually.

What did you buy after your first big Hollywood payday?

Titleist Balata 100s. At the time, they were 12 bucks a case, and that was high living. Those damn things were soft, and if you hit them skinny you put a smile on them. Man, nothing felt better than hitting one smooth and just feeling like a marshmallow off the club.

I thought you’d say a Ferrari or something.

Look, when I got my first paycheck, there were two things I was dancing around about: buying cases of Titleist Balatas and putting super unleaded in my truck.

You’ve played golf with Willie Nelson. Does he spark up before a round?

Before, during and after.

Your best-selling book, Greenlights, is full of McConaughey life lessons. What’s the best advice you’ve gotten that applies to golf?

Give me a footnote when you do.