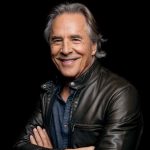 Don Johnson once got down to a 3-handicap.

When he’s not being charmingly smarmy, (Tin Cup) conniving (Knives Out) and a cutup (the NBC sitcom Kenan), he’s carving shots at Sherwood in Cali.

GOLF: When did you first pick up a golf club?

DJ: In my early 30s. Dickey Betts from the Allman Brothers Band and I were trying to get sober, so we thought, We’ll spend all day at the golf course; it’ll give us something to do. Of course, that didn’t really work out that well.

G: It sounds like there was a ton of partying on the set of Tin Cup.

DJ: That would be an understatement. Kevin [Costner] and I were both single at the time, so we just played golf and partied.

G: Which pro in the movie “enjoyed” himself the most?

DJ: Well, [Craig] Stadler wasn’t one to miss out on some fun.

G: You versus Costner — who wins?

DJ: Kevin’s a great athlete, but I probably play better golf than he does because he doesn’t love the game.

G: What’s the lowest your handicap has been?

G: Have you ever pulled a tin cup in real life? Just totally self-destructed on a hole?

G: Golfers are known to wear some crazy, colorful outfits. Would you ever be caught dead on the links in an outfit from your Miami Vice days?

DJ: Most likely not. But I used to play in the AT&T tournament with Payne Stewart, and I loved his whole thing. When you’d run into him off the golf course and he didn’t have his plus fours on, you wouldn’t recognize him. You’d walk right by him. I loved him.

G: Who’s the most famous person you’ve played a round with?

DJ: Maybe Sean Connery. We played out at Sherwood, and it was Mother’s Day. Women kept coming out onto the course, and Connery kept getting really p—ed off.

G: Who would be in your dream celebrity foursome?

DJ: Jack Nicholson and I used to play a lot. He’d be one. But the problem with Jack is that no matter what score he gets, it’s always one less than yours. He’s math-challenged. I don’t know if Eddie Murphy plays golf, but if he did he’d be fun. And then Cheech Marin. He gets more fun out of finding golf balls in the out-of-bounds areas than he does actually playing. It’s like an Easter-egg hunt for him.

G: Which of your films best describes your game on a bad day: Dead Bang, Django Unchained or Dragged Across Concrete?

DJ: I think it’s going to have to be Dragged Across Concrete. That’s when you’re shanking them and it’s just an ugly day.