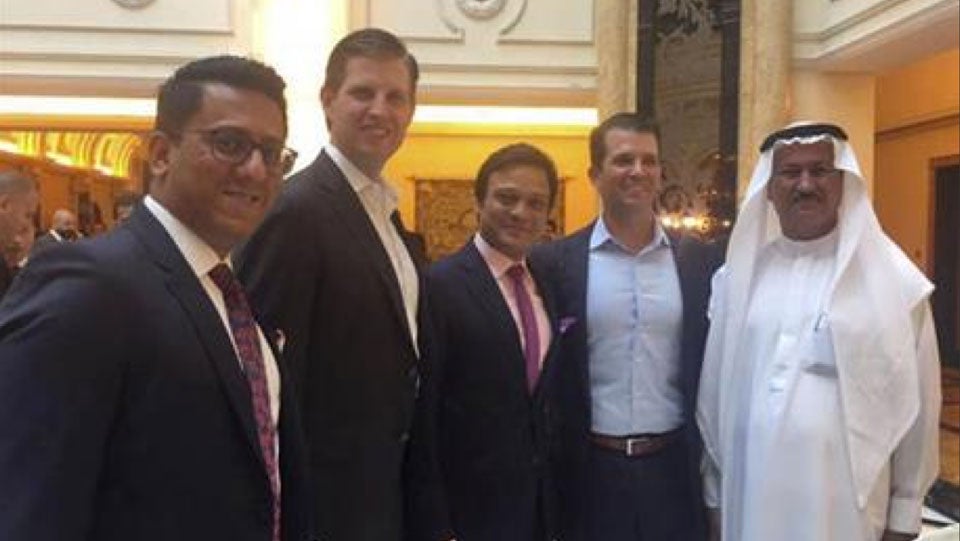 The visit to Dubai, the first joint business trip abroad by Eric and Donald Trump Jr. since their father’s inauguration, comes as questions still swirl about how the Trump Organization’s many international business interests will affect the administration of America’s 45th president.

Photographs shared on social media by real estate brokers showed Eric and Donald Jr. first attending a private luncheon Saturday afternoon in Dubai with Hussain Sajwani, the billionaire who runs DAMAC Properties, the developer that partnered with Trump on the golf course.

“It’s rare in the world where you can be such great friends with a partner and that’s what we have right here,” Eric Trump said. “Hussain, he is an amazing person and DAMAC is an amazing company.” 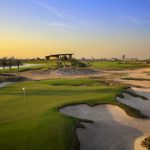 You may also like A first look at Trump International Golf Club Dubai, Trump’s newest track in the Middle East

The two Trump brothers later met with over 80 people gathered at the event, attendee Niraj Masand told The Associated Press.

They were “expressing their gratitude to Mr. Sajwani, who is the chairman of DAMAC, and sort of expressing their happiness to meet with all the partners,” said Masand, a director of the real estate firm Banke International.

After sunset, the two sons arrived at the golf course designed by American golf architect Gil Hanse. A string octet played classical music on the edge of the course as guests munched on gourmet canapés including tuna tartare and Vietnamese-style spring rolls.

The golf course sits inside a larger villa and apartment building project called DAMAC Hills on the outskirts of Dubai. Some 100 Trump-branded villas also are on the property, selling from 5 million dirhams ($1.3 million) to over 15 million dirhams ($4 million).

You may also like PHOTOS: A sneak peak at Trump International Golf Club Dubai

It’s unclear what additional security protection the two sons will receive while in Dubai as experts already have warned the Trump brand abroad now faces a global terror risk .

The U.S. Embassy in Abu Dhabi has declined to comment about the trip, while Dubai police did not respond to a request for comment.

However, the United Arab Emirates, a staunch U.S. ally in the war against the Islamic State group and host to some 5,000 American military personnel, remains a peaceful corner of the Middle East. Its hereditary rulers and other Gulf Arab leaders hope to see a harder line from America on Iran after growing increasingly skeptical of its intentions following the nuclear deal with world powers negotiated in part by the Obama administration.

The UAE’s foreign minister even backed Trump’s travel ban on seven Muslim-majority nations earlier this month, which didn’t include the UAE or neighboring Saudi Arabia. All but four of the Sept. 11 hijackers came from Saudi Arabia, while two came from the UAE.

Ties between the Trumps and Sajwani remain strong. One of the Trump Organization’s subsidiaries received from $1 million to $5 million from DAMAC for running the golf club, according to a U.S. Federal Election Committee report submitted in May.

Sajwani and his family also attended a New Year’s Eve celebration at Trump’s Mar-a-Lago club in Florida, where Trump referred to them as “the most beautiful people from Dubai.”

Trump days later told journalists that DAMAC had offered the Trump Organization $2 billion in deals after his election, something DAMAC later confirmed.

The Dubai golf course marks Trump’s first successful venture in the Arab world. Another Trump-managed golf course, designed by Tiger Woods, is planned for another even larger DAMAC project under development and the developer has been putting up billboards around Dubai advertising the newly opened course.

The 18-hole course has raised questions about how the Trump Organization’s many international business interests will affect the administration of America’s 45th president.

Already, a liberal-funded watchdog group has filed a lawsuit alleging his business violates the so-called emolument act of the U.S. Constitution. Similar questions have been raised by legal experts over Trump’s Dubai course.

Trips abroad by Trump’s two sons are expected to continue. Before Trump’s inauguration, his son Eric visited the Trump Tower Punta del Este in Uruguay to check on the tower’s progress and personally greet buyers. A Trump hotel in Vancouver, British Columbia, is also expected to soon host Trump’s sons.