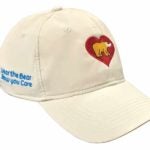 The “Wear the Bear. Show You Care” initiative has raised $155,000 for the Nicklaus Children’s Health Care Foundation.

In support of the Nicklaus Children’s Health Care Foundation initiative, Raymond James will match up to $20,000 in donations. You may donate here.

Jack Nicklaus’ accomplishments as a golfer need no introduction even to the most casual of sports fans. His achievements as a philanthropist, equally impressive, are generally less well known, as are those of his wife of 60 years, Barbara. The couple’s longstanding focus on children’s health began in near-tragedy. In 1966, unbeknownst to the Nicklauses, their 11-month-old daughter, Nan, swallowed a crayon, causing ongoing struggles to breathe, recurring choking episodes and, eventually, pneumonia. The doctors at Columbus (Ohio) Children’s Hospital (now Nationwide Children’s Hospital) figured out the mystery and saved Nan’s life — and focused Jack and Barbara’s charitable impulses on young people’s well-being.

In 2004, the couple founded their legacy project, the Nicklaus Children’s Health Care Foundation (NCHCF). Its numbers are as staggering as Jack’s 18 major championship wins. The Foundation has raised $125 million and granted more than $80 million toward leading-edge pediatric healthcare in less than two decades. One outgrowth of its generosity: In 2015, the Miami Children’s Hospital in their adopted home state of Florida was renamed the Nicklaus Children’s Hospital, a facility that has helped children from every state in the U.S. and 119 countries worldwide.

Fast-forward to today, and the grim, world-changing Covid-19 coronavirus pandemic. For starters, masks became a necessity for everyone at hospitals, where universal mask policies have become standard practice. Nicklaus Children’s Hospital found itself spending upward of $20,000 per week in personal protective equipment (PPE) for its frontline workers, patients and patients’ families — a number that is likely to increase in the months ahead.

“The need for supplies has gone up tremendously,” said Patty McDonald, CEO of Nicklaus Children’s Health Foundation. “It’s a big additional expense for hospitals. Additionally, children’s hospitals around the country have been losing about $1 million per day — this virus has affected children’s hospitals in a very significant way.”

A surgeon at Nicklaus Children’s Hospital, Dr. Chad Perlyn, had an inspired idea to advocate for Covid-19 safety — one’s own and others’ — as well as to promote support for the hospital and foundation. The Nicklaus Children’s Health Care Foundation’s logo is Jack’s iconic Golden Bear logo set within a red heart. What about having the bear where a mask?

The image became a slogan: “Wear the Bear. Show You Care.”

The slogan became an initiative.

Working with headwear maker Ahead USA, the foundation came up with the idea of creating a limited-edition hat with the new masked bear logo and matching slogan. Normally, of course, the profit margins on hats wouldn’t be enough to raise significant funds, at least in a short period of time. Circumstances demanded something bolder: an appeal to generosity.

The foundation decided in advance of Father’s Day to sell the hats for $100 each, with a matching $100 donation made by NCHCF itself — $200 to the Covid-19 Relief Fund at Nicklaus Children’s Hospital in the recipient’s name, along with a card that tells the heartwarming story of “Wear the Bear. Show You Care.” You can donate here.

“This pandemic has reminded us of the things we hold dear — our families and our health,” said Barbara Nicklaus. “As the threat continues, we want to make sure the professionals who risk their health to care for us have the protective equipment they need to stay safe. We have to pull together to get through this challenge.”

From Father’s Day to Independence Day, the “Wear the Bear. Show You Care” initiative has raised $155,000, including the foundation’s match. Sadly, the number of coronavirus cases has only continued to rise, with Florida particularly hard hit. As such, the foundation decided to keep the program going for the foreseeable future.

“Whatever we can do as an organization dedicated to advancing and enhancing pediatric healthcare for children, we want to do that,” McDonald said. “That’s the heart behind the organization, and behind Jack and Barbara’s involvement.”