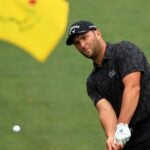 Jon Rahm is the betting favorite to win the 2022 Masters this week.

Major season begins with this week’s 2022 Masters at Augusta National, and now it’s time to get your bets in for golf’s biggest tournament. Interestingly, the three favorites to win, according to the Masters betting odds via BetMGM, have exactly zero green jackets among them. Here’s what you need to know.

The top three favorites to win the Masters shouldn’t come as much of a surprise to avid golf fans. World No. 2 Jon Rahm leads the way at +1100, thanks to his dominant play last year that peaked with his U.S. Open victory. Just behind him is Justin Thomas (+1200), the World No. 7, former major champion and perennial contender at Augusta.

In third place is Australian Cameron Smith (+1400), who broke the single-tournament scoring record at the Tournament of Champions in January before winning the Players Championship, and who finished T2 and T10 at the last two Masters.

But one thing none of those three players have hanging in their Augusta lockers is a green jacket. You have to go to fourth in the odds-to-win to find a Masters champion, Dustin Johnson at +1600.

With World No. 1 Scottie Scheffler tied with DJ at +1400 and 2015 Masters winner Jordan Spieth in fifth at +1800 (not to mention Rory McIlroy, Xander Schauffele, Collin Morikawa, Viktor Hovland, Patrick Cantlay and Brooks Koepka lurking close behind), it might be harder than ever to pick a winner at this year’s Masters. Oh, and Tiger Woods is currently listed at +5000. Good luck.

This week’s long shot honor goes to former major champion Lucas Glover. The 42-year-old Tour veteran has steep odds to win at +30000 this week, but there are a few reasons you should give him consideration.

First, he’s already won a major and did so on a difficult, iconic Golden Age course: the 2009 U.S. Open at Bethpage Black. That’s real proof that he can summon his best in the tensest moments on golf’s best courses.

And although the second Bethpage Open was a long, long time ago, Glover has proven himself much more recently. He ended a 10-year win drought last July when he triumphed by two strokes at the John Deere Classic.

Should you trust $100 of your hard-earned cash on Glover and he goes on to capture his second major title on Sunday night, you’ll go to sleep $30,000 richer.

You can check out the top 15 in Masters betting odds as of Monday night below, or head over to BetMGM to see the full list of odds and bets for this week.

How to bet on the Masters

Looking to make a (legal!) wager yourself? We teamed with BetMGM, and the online sportsbook is offering a new promotion for the Masters: Get a $20 free bet when you bet the first 4 days of the tournament at Augusta! Sign up for an account to get into the action today.